Teddy Wolff
June 21, 2021
Dacha 46 Is A Queer Love Letter To Eastern European Cuisine
An interview with Jessica & Trina Quinn of Dacha 46 on taking their Eastern European food project from an at-home concept to a full-on brunch series.

“I think one of the things that really drew us to each other was that 90% of our conversations revolved around eating, cooking, food, and b*tching about work.”

Jessica and Trina Quinn are the married chef team behind Dacha 46, an Eastern European food project that is taking over the former space of Meme’s Diner in Prospect Heights with a series called “Banya Brunch.” Libby Willis, former co-owner of Meme’s, has converted the space into a shared kitchen for KIT, her new chef incubator for up-and-coming queer-run food businesses.

After being laid off from their chef jobs in 2020, Jessica and Trina launched Dacha as a takeout-only business from their Bed-Stuy apartment. Now, they’re scaling up for that weekend-only brunch series in Brooklyn featuring a rotating menu of takeout specials like breakfast piroshki and pork-stuffed pelmeni, inspired by Jessica’s Latvian-Ukrainian background.

In June 2021, we chatted with them about their transition from restaurant chefs to independent business owners, what “queering” Brighton Beach looks like, and more.

This interview has been edited for clarity. 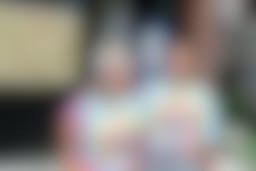 HOW DID EACH OF YOU DISCOVER YOUR LOVE OF COOKING? WAS THERE A SPECIFIC MEAL OR PERSON IN YOUR LIFE THAT INSPIRED YOU TO START?

Jessica: My background is Eastern European. And all of my earliest memories revolve around family dinners being cooked at home or going out to eat. I remember sitting down at the table with lots of family and friends and just eating an endless supply of really good food. And I think that kind of did it for me. You know, I was like a little fat kid who just wanted nothing more than to eat all the time.

Trina: It’s funny because I think I was the opposite. I kind of got thrown into cooking. I was vegan for like 13 years. And I’m an ’80s baby and at the time, being vegetarian was like a scandal. So I ended up cooking a lot for myself to survive. I was like, “Well, I’m not going to eat your meat.” And so I ended up learning how to do everything myself. I am no longer vegan, obviously. But I found my way to cooking by learning how to work around that. 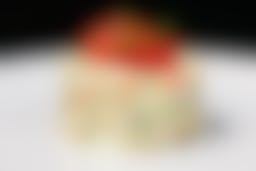 DACHA WAS BORN FROM THE TWO OF YOU COOKING TOGETHER AT HOME. DO YOU HAVE A FAVORITE DISH THAT YOU MAKE TOGETHER?

JQ: A favorite dish we like to cook together? I think plov. It’s become like a staple. It’s just like a lamb and rice pilaf that has tons of cumin, paprika, sauteed carrots, and onions. And it’s one of these like one-pot dishes that is so satisfying.

TQ: And we also make it vegetarian most of the time.

JQ: Yeah, we are also trying not to just gorge on meat. So we’ve made a lighter version that’s still very flavorful and filling. 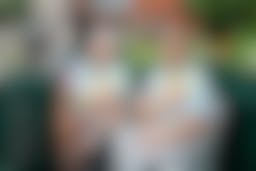 JQ: I love it being labeled as “queering” because I think Eastern European culture has a connotation for not necessarily being the most inclusive. And for a long time, I didn’t really feel like I had access to my own culture. Because when I came out, I kind of felt rejected by my background. I really think it took Trina pushing this agenda [for me to] really tap into it. She was like, “Reclaim that culture, reclaim that food.”

TQ: The [Eastern European] people are crazy. And they’re so much fun. And there’s just so much celebration. I was like, “How can you not want to be in this? Why are you keeping me from me?”

JQ: She said I was keeping her locked away from this insanity, which I was. [Laughs] But I think we’re a really good mix. The traditionalist ideas definitely come from me, because it’s my background and a lot of the food centers what I grew up eating. And then Trina has this really beautiful, fresh new take being newer to this [cuisine]. She has really been able to take the food that I remember and put her own stamp on it. She’s made it a little bit more inclusive and accommodating of different dietary needs. So our food is just a little lighter, a little fresher, and all stuff that people will feel good eating. 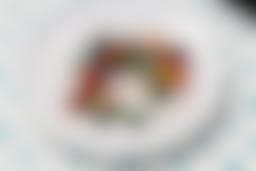 CAN YOU TELL ME MORE ABOUT THE RAINBOW PELMENI FOR PRIDE MONTH? WHERE DID THE IDEA COME FROM?

TQ: [Laughs] Yeah, I felt like we should do something for Pride Month, but I didn’t want it to be super kitschy and I wanted it to actually taste good. So we decided to do an assortment of rainbow pelmeni with all-natural flavors and colors, and I thought it was going to be super easy. But, it took me quite a few weeks to really nail down those colors. We did a green disco pelmeni a few weeks ago, and it was really important that you could taste it. The finish was the color but the deal was the flavor. But for the rainbow pelmeni, I tried to tone back the flavor profiles because they’re made of beets, tomatoes, carrots, dill, and spinach. Plus, butterfly pea powder and blue spirulina for the blue.

JQ: I think another big thing is that, as much as we want the food to look exciting and approachable, we also don’t want to just serve food that’s instagrammable and tastes like shit. When we first started out, all of our food was brown. And I’m the first to admit that ugly brown food tastes good. But, it’s also nice to play around with color and a little bit more of a feast for the eyes. 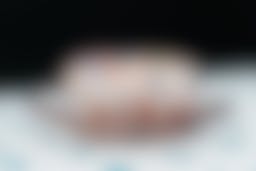 THERE’S A SURGE OF “QUEERS IN THE KITCHEN” DOING AMAZING FOOD PROJECTS AND POP-UPS RIGHT NOW IN BROOKLYN. HOW DOES IT FEEL TO BE A PART OF THIS COMMUNITY?

JQ: We’ve talked about this incessantly over the last year and as awful as COVID has been, it’s really hard to say it, but it was really good for some people. And honestly, it was good for the marginalized people - for the people who the [restaurant] industry wasn’t looking out for. When you’re working non-stop and you don’t get to talk with your peers, it’s hard to foster these relationships. And Dacha wouldn’t be Dacha without the help of the community we’ve fostered during the last year. We’ve had Woldy from Woldy Kusina, Eric from Ursula, Lani from Brutus Bakeshop, Telly from Hags, Chef Paxx (@paxxito) in Puerto Rico, and even Jenna from Solid Wiggles who’s currently sharing the KIT space with us. And it honestly feels like things are more possible because we have an entire community and we’re all rallying for each other and sharing information. It’s sort of like this endless pool of resources that we’ve all tapped into. When you’re the lone queer working in a restaurant, that isolation is going to make you feel a certain way. But when you’re one queer of dozens or hundreds, suddenly you feel like you can do things that felt impossible, even just a year ago. 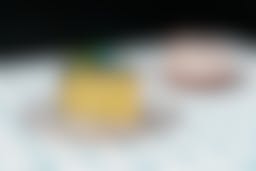 ARE THERE ANY OTHER QUEER-RUN RESTAURANTS OR CHEFS YOU’RE FEELING INSPIRED BY RIGHT NOW?

JQ: It’s funny, there’s like this Brooklyn club that’s definitely popped up. But like, all of the food is outrageously good. That distinction needs to be made. We’re not just talking about the queer community, we’re talking about serious chefs making serious food. We’re not just shouting people out for the fact that they’re queer. They’re just remarkable chefs.

TQ: And beyond queer-run food businesses, we’re talking about businesses that are really uplifting and showcasing their queer staff. [As queer people], we just happen to be very talented. We’re not just saying queers make the best chefs, but it’s not a surprise that we do so well. We just don’t tend to have as much capital and, you know, endless resources to showcase and highlight the work that’s being done within the community. But once again, that’s clearly changing.

To get a better idea of where chefs Jessica and Trina like to eat around the city, we asked them to share a few of their favorite NYC restaurants and pop-ups with us.

Auxilio Space All Over

“Earlier this month, we went to the "First Saturdays" marketplace at Brooklyn Museum and ate at an Auxillo Space pop-up run by Zacarías González and Tony Ortiz. They did horchata and chicken tinga tostadas, and we’re excited that they’re getting their thing going.”

“Queering up Brighton Beach is one of our favorite things. And Tatiana’s is sort of like the last of its breed, but they are a staple in the area. They’re located right on the boardwalk with two different restaurant spaces. First, they have Tatiana Grill, which is their casual, a la carte, dining option that’s open on weekdays. And then at night on weekends, they open Tatiana Restaurant, which is the last spot that still puts on an old-school cabaret shows in the area. It’s like a dinner and a show that feels like an acid trip. From the music and costumes to the dancing and all the velvet, it’s basically a nightclub on steroids." 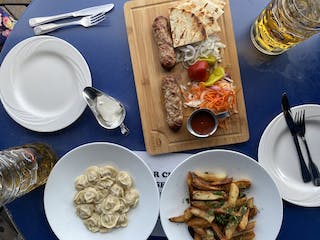 “This is another one on Brighton Beach. They make the best piroshki in the neighborhood. They still have the old ladies standing behind the counter doling out piping hot fried dough filled with all kinds of different stuff. It’s our favorite place to go in the morning before we head to the beach. They’re open 7 days a week, but Wednesday through Sunday is when they have the best ones. The earlier you get there the better.” 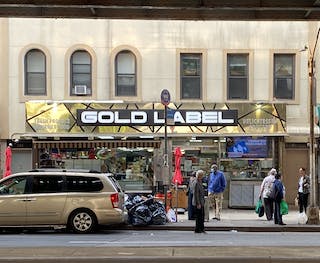 “This one’s a local spot for us. They’re kind of a staple in the Bed-Stuy area.” 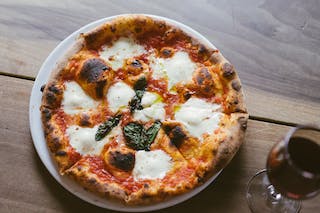 “Not only is Eric’s food incredible, the way he treats his staff is remarkable. That’s a huge element that we take into consideration.”

“Pre-pandemic, this spot on the Lower East Side was another very queer, celebratory, and inclusive space.” 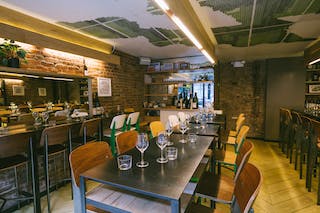 “Via Corota has been a date night place for us since they opened. And Rita and Jody are like my lesbian fairy godmothers that I wish would adopt me,” says Jessica. “Plus, the food is fantastic. The same thing goes for Bar Pisellino across the street.” 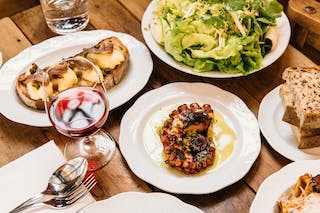