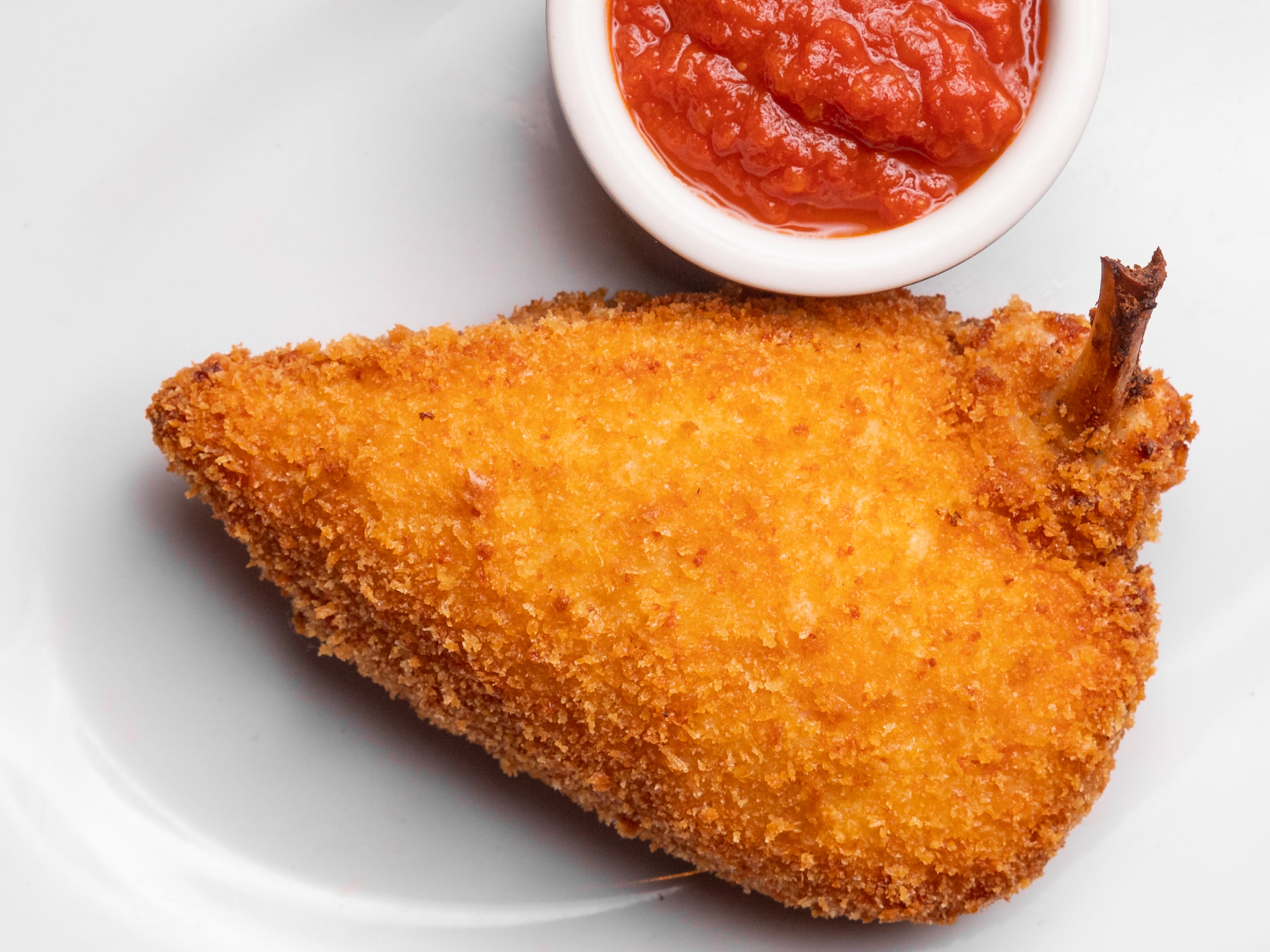 There are people who will say that LA winters are “mild,” that “it doesn’t even snow here,” and that “it’s literally 70 degrees most days.” And... yeah, all of those things can be true, but we still want to eat a crispy, salty, comforting fried chicken cutlet, drenched in melted mozzarella and parmesan. It makes us feel like we’re wrapped in a warm blanket of marinara, which is exactly what we need to combat those chilly 50-degree nights. And we get the feeling we’re not alone, which is why we made this guide. Here are nine spots across LA that serve tremendous chicken parmesan.

While there are plenty of pizzas at Danny Boy’s, a New York City transplant in Downtown LA, hidden at the bottom of the menu is a chicken parmesan sandwich that’s perhaps our favorite in the entire city. It comes on a charcoaled, blistered loaf, one that’s black on the bottom in a way that makes the dough nice and chewy. The chicken is juicy and succulent—smashed down flat and thinly breaded in the way chicken parmigiana should be—and that sauce. Wow. Much richer, and much more garlicky than many of the other red sauces out there, this one tastes like a blast of flavor and spices to the face… in an enjoyable way, of course.

There are two different chicken parms at Mario’s Italian Deli & Market, as well as wonderful prosciutto sandwiches, pickled artichokes sold by the jar, and deep-fried cannoli. You can either order them as an entrée, which arrives in a pool of red sauce, or as a sandwich. We prefer the sandwich, just because there is so much sauce, and the bread it’s served with is sturdy and fluffy, the way we wish our mattress was. Everything works together in perfect harmony: the bread sops up the sauce, the crispy chicken plays off its softness, and mozzarella cheese holds it all together. Order this, plus a few deli sides if you’re heading to the park (or the movies or a friend’s house or just back to bed).

Dan Tana’s is pretty much The Godfather of LA chicken parmesans (and not just because it feels like Don Corleone definitely ate here). This Santa Monica Blvd. spot has been open since 1964, and this dish is a throwback to the days when no one in West Hollywood worried about portion size, trans fats, or putting three pounds of cheese on top of chicken and calling it a meal. The chicken is tender, the seasoned breading is crunchy but not overpowering, and the marinara sauce is a perfect balance of sweet, herby, and salty. If you’re going to make someone an offer they can’t refuse, you do it at Dan Tana’s—and you do it over a plate of their chicken parm.

This is going to ruffle some feathers, but this relatively new Italian spot—they opened more than 50 years after Dan Tana’s—challenges their elders for the best chicken parmesan in the city. The $28, thinly pounded breast is massive—big enough to feed two people for two meals. We’re not convinced it didn’t come from the emu farm where Disneyland gets its “turkey legs” (just kidding, please don’t sue us). But size isn’t the only reason we love this dish so much—the chicken is moist, extremely crispy, and tender enough to cut with a fork. The marinara sauce is made with deeply caramelized tomatoes. The parmesan on top is broiled until it’s golden-brown, and then the whole dish is flaked with huge leaves of fresh basil. In other words, every element makes this a basically perfect parm.

Venice’s Ospi does things a little differently with their chicken parmesan. First, it’s not really on the menu—you have to order their butter chicken “parm-style” for an extra five bucks. Second, there’s no marinara sauce involved; instead, you’ll find a heaping amount of their excellent spicy vodka sauce over their chicken cutlet, which is pan-fried with butter and lemon. The dish is showered with parmesan cheese, and fresh purple and green basil that give it an herbaceous punch. We don’t usually like when people f*ck with perfection, but this new take on a classic is a major exception.

Another spot that eschews marinara in favor of vodka sauce, Ggiata is an Italian deli in East Hollywood. Their chicken parm sandwich is called the Spicy P, and the breast cutlets are loaded with some extra-spicy and supremely Romano-heavy vodka sauce, then hit with just enough pesto that you get a bit of basil in every bite. The whole thing is served on a seeded baguette from LA’s Bread Bar, which contains the contents of the sandwich quite nicely.

You go to Eastside Market for their massive sandwiches, and the chicken parm is no exception. They’re not doing anything groundbreaking with this sandwich, which is actually a special (even though it’s on the menu every day). But what this version lacks in innovation, it makes up for in girth. The chicken is pounded thin, then lightly breaded before getting seasoned with Italian herbs. It’s slathered in salty marinara sauce, topped with melted provolone and parmesan, and served on a pillowy, house-baked sub roll. Get ready to be horizontal when you finish.

With a name like Parm Boyz, you better make a damn good chicken parm. And while they’re not reinventing the (cheese) wheel at this pop-up, they are doing an excellent take on a classic parm. The chef grew up in Lynn, MA, near Boston, and—if you're familiar—this version might remind you of what you'll find at North End Italian restaurants like Joe Tecce’s and La Famiglia. There’s a beautiful red sea of incredibly rich sauce that would almost make you forget the chicken is the star of the show if that chicken wasn’t so beautifully crispy and tender. By the way, don’t leave without an order of garlic bread stuffed with burrata, mascarpone, and cream cheese—it’s perfect for sopping up some leftover marinara sauce.

Dear John’s take on chicken parm isn’t the messy affair you usually expect from this dish. It arrives from the kitchen looking like a breaded and fried chicken tender with a wing bone sticking out of it. But once you cut into the meat, melted mozzarella and rich marinara sauce ooze out of it, giving you all the tomato-and cheese-filled flavors you hope for in a parm. It’s sort of a hybrid with a chicken Kiev, and, even though we miss the mess, we appreciate that you can actually taste the moist, crispy chicken.