Emily Schindler
August 12, 2021
Vaccine Mandates Are Coming For Indoor Dining. Here’s How NYC Restaurants Are Preparing
From mask policies to vaccination checks, here's how restaurants like Dame, Dirt Candy, and more are dealing with the latest government mandate. 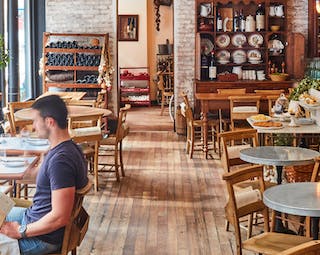 If you want to dine indoors in New York City after September 13th, you’ll need to be vaccinated. Mayor Bill de Blasio announced this mandate, the first of its kind in the United States, on August 3rd. For restaurant owners, the news was a relief, as many had already begun asking for proof of vaccination or were in discussions to do so.

At Dirt Candy on the Lower East Side, chef and owner Amanda Cohen started requiring proof of vaccination the same week as the announcement. Guests are notified three times—“when you make a reservation, even before, it says we require proof of vaccination and we are requiring masks when you’re not at the table. When you get the confirmation, it says it again. When we send a text day-of to reconfirm, it says it in there.”

For Cohen and her team, a government mandate makes the policy easier to enforce. “Anyone who’s worked in a restaurant for the past year has really been the COVID police, especially with the masks. So the more we can keep saying it’s a city mandate or CDC recommendation, it makes it so much easier for all of us.”

Uptown at tasting menu restaurant Reverence, chef-owner Russell Jackson decided to require vaccinations through his work with the Aspen Institute’s COVID Task Force on hospitality operations, which creates shareable resources and recommendations for other restaurants to use. His policy launched in June 2021. Jackson takes great pride in keeping his team, family, and customers safe—to date, no one on his team has gotten sick. He wants to protect everyone from the virus, especially his two-and-a-half-year-old son, “I don’t want to take any additional risk to have him get infected. The reports of the long-term effects of Delta on children—the heart issues, the brain issues, the compromised immune systems—I couldn’t live with myself, basically ending so much of what he could potentially be... there’s no reasonable risk that makes it okay.”

On their Tock page, Reverence guests see the vaccine policy explained at time of reservation. Jackson uses the system to make sure everyone is compliant—“no vax card, no love.” The restaurant keeps the door locked and checks vaccinations as they admit guests. Also shared online—and displayed throughout the restaurant—is the Aspen Institute’s Safety First task force Diner Code of Conduct, calling for vaccination, mask wearing, and rescheduling a visit if you’re under the weather.

Vaccination concerns are of course not limited to guests, and restaurant operators have been wrestling with the rules and challenges around vaccinating staff since COVID vaccines first became available.

Jackson recalls the scramble to get appointments for himself and his staff, “turning our team Slack channel into a command center” to navigate the process. At King in Soho (where the whole staff is vaccinated), partner Annie Shi worries for other restaurants where that’s not true. “Are you supposed to fire your staff that don’t want to get vaccinated by September 13th?” she wonders. “It’s super unclear and challenging.”

For the first diners affected by the policy, Shi’s team took the extra step of calling and emailing each guest “to make sure everyone had the information before they left their home.” After a quiet weekend of indoor dining, Shi saw “a financial impact to this decision, and I worry about the impact for the fall/winter.” But she also calls the city mandate, “a little bit of a relief as we saw the cases creep up a bit.”

Shi describes the process of checking cards at the door as “not so dissimilar to checking for IDs when you think someone’s below 21. If there’s a sudden spike in faked vaccine cards, that’s beyond something that we as a restaurant can manage and think about. When you check someone’s ID, you’re not vouching for that ID. Yes, we are checking photos, Excelsior pass, the actual vaccine cards. Do I know if the name matches the person sitting in front of me? No. We’ve already become bouncers in a way, it’s already beyond the normal relationship between a restaurant and guest. I would not want to take it much further.”

Jeff Katz, a partner at Crown Shy in the Financial District, agrees that the mandate “is the right thing to do. Until it’s government-mandated, you’re dealing with guests who may not agree with you. When you fall back to the city or state rules, it’s not really a choice. Obviously, we operate within the context of the law.” If guests don’t want to show proof of vaccination, Katz says “they’re not coming in.”

Crown Shy, and the other restaurants mentioned here, will not store guests’ vaccine information—customers will present it each time. Crown Shy has a large corporate events business and has already booked fall events where they’ll need to enforce the mandate. Katz isn’t worried. “We do a lot of corporate functions,” he explains. “They’re more concerned to appear to be going somewhere that seems to be buttoned up with all of this.”

Katz is also reassured by Manhattan’s relatively high vaccination rate. “We take all of this very seriously,” he says, “and the staff is comforted by that. Any disappointment comes not so much from a policy change ... it just in some ways [is] a step back. We’re in the business of smiling and if you give me a mask, it makes it harder to do that. A lot of us were excited about getting back to normal. We were looking forward to not doing this anymore. Hopefully we are on the other side of something, and this is a precaution.”

Another early adopter of vaccine proof is Dame in Greenwich Village, which announced their vaccine policy on July 28th. Co-owner Patricia Howard is immunocompromised, as is the spouse of someone on the team, “so we always err on the side of caution,” she says. Howard noticed restaurants like Frenchette, Estela, Altro Paradiso, and Cervo’s requiring proof of vaccination before Dame and was encouraged to see it working. “If it pushes a few people over the edge to get vaccinated, that’s for the greater good,” she says.

Howard reminds guests twice when they make reservations via Resy and checks their cards at the door. She’s seen international vaccine cards from India, Canada, and elsewhere, though occasionally she can’t seat tourists who aren’t aware of the policy. She had one moment where a pair on an early date learned one of them was unvaccinated, putting a damper on the romance.

Since the announcement, Dame has gotten several one-star Yelp reviews and texts to the reservation line calling them fascists and Nazis. They had to turn off comments on the Instagram announcement. From actual customers, the response has been positive. “We wanted to protect our team and take any measures to take back control from this virus,” says Howard. “Restaurants have been really at the whim of COVID for the past nearly two years, back and forth with the city’s regulations. This felt like something we could do to be proactive and really protect our space, our staff, and our diners.”

COVID continues to affect not just restaurant policy, but also the physical structures and seating arrangements of dining out. In mid-June 2021, Libby Willis and Katie Zanin opened KIT, a queer food space in Brooklyn with multiple businesses (Zanin runs Black Cat Wines with Rocky Owen, and Willis runs the bakery and cafe). After closing the beloved MeMe’s Diner, Willis designed the flexible counter-service concept to have limited indoor seating. Recognizing the “vaccine process is easier for us than it is for other people,” Willis has guests at KIT show proof of vaccination only if they opt to sit at one of the few indoor seats. Otherwise, they can eat outside or take things to go.

Zanin recalls that until recently “people were feeling good” and had started to go maskless indoors. In the past few weeks, The KIT team started masking again, made new signage, and started reminding customers to wear their own masks, which some vaccinated guests bristled at. “The burden is on us to introduce this very regulated thing into our hospitality style,” says Willis.

Across the board, restaurant owners interviewed for this story say that parents prefer for their children to sit outside for safety, and they will follow future city guidelines about guests under 12 who cannot be vaccinated. Outdoor seating offers an alternative for guests who don’t wish to share proof. “If you’re not vaccinated,” says Amanda Cohen, “why would you want to eat inside? Outside seems better.”

With the Delta variant and colder weather on the horizon, there’s a sense of exhaustion among restaurateurs, even while adopting a well-received vaccination policy which “took the onus off us,” as Russell Jackson puts it. Annie Shi explains, “We would really love to have a period where the only things we worry about are just the normal restaurant woes. There’s a lot of emotional fatigue. We have to really have a little bit more endurance to see what the rest of this year brings. Hopefully people are getting vaccinated so that we can be back to whatever ‘normal’ is, sooner rather than later.”

“People are coming in with masks on and saying we’ll keep them on,” adds Cohen. “Nobody wants to go back. Everybody would rather adhere to the rules and get past this and through. Everybody sees this as the temporary solution so we can move forward—if we just do this now, we don’t have to wear masks for the rest of our lives.”