Photo by Prachi Palwe on Unsplash
May 21, 2021
Miles Apart, We Gathered On Zoom To Learn How To Cook Indian Food
During the pandemic, my family turned our weekly call into cooking lessons. That’s where I learned about my mom’s not-so-secret-ingredient, hing.
TR
Written by
Trupti Rami

For years, the only “Indian thing” I knew how to make was chai. I don’t mean sinking a TAZO Classic Chai tea bag into a mug of hot water or dropping a PG Tips pyramid tea bag into freshly boiled water, steeping for five minutes, then removing it and adding milk and sugar, though that’s good too. I mean the masala or ginger chai I grew up seeing and eventually drinking with my Gujarati family. My parents take chai naasto (a.k.a. tea with a full spread of mostly salty and some sweet snacks) very seriously. It’s an every morning occasion that my three sisters and I missed dearly during the pandemic. So much so that in July 2020 — four months into an unforeseeable locked-down life with my family spread across five cities and four states, we turned our weekly family Zoom call into Indian cooking lessons with my mom. We started with chai — so we could master it once and for all — and over the next six months our mom taught us four sisters how to make all our favorite Indian dishes.

Our calls typically take place post-chai naasto on Sunday mornings. My mom’s chai is kadak, or very strong. That’s how she likes it and how she’s made it for over 35 years. It’s slightly sweet with a spicy kick and served hot enough for a thin milk-skin, the color of a Cadbury Dairy Milk bar, to form on top. She uses Wagh Bakri loose-leaf black tea, which consists of tea fannings, coarse tea dust that brew faster than full leaves, about a half tablespoon per serving, and Everest Tea Masala or freshly grated ginger, about a half teaspoon per serving. After the chai lesson, we moved onto snacks like batata poha (spiced potato and flattened rice flakes); bhajiya, or pakora; and green chutney, made with cilantro, ginger, and jalapeño. By August, we were ready to start learning main dishes.

My sisters and I were less familiar with cooking Indian entrées. I had made the NYTimes Cooking’s Punjabi Chana in years past, but the results were noticeably different from my mom’s chholay. Some thing was missing. On August 2, 2020, I found out what. It was hing.

That day on Zoom, my mom was teaching us how to make handvo, a savory bread made with rice and lentils, when she mentioned hing for the first time in my memory.

She takes a white plastic bottle with L.G. in big red letters on the label and shakes it over the spices crackling in a saucepan. An ochre powder sprinkles out.

Younger sister: What is that?

Oldest sister: What are you shaking on there?

Mom: It comes in a bottle like this. Points bottle toward camera. You can get it at the Indian store.

Younger sister: Reading a description from a quick web search on her phone. Asa-foe-tida. Asafoetida. “It’s a dark brown, resin-like substance that is derived from the root of ferula.”

Younger sister: “Food of the gods.”

Fellow middle sister: Also on her phone. It says it’s used in vegetarian Punjabi and Gujarati food for savory flavor. 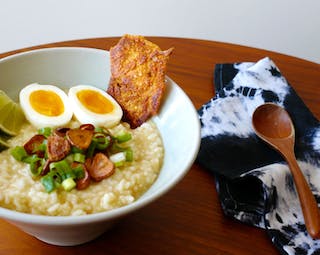 Arroz Caldo Was The Comfort Food That Fed Me Through Quarantine

Like my younger sister said over Zoom, hing, or asafoetida, is a spice that comes from the ferula asafoetida fennel plant. In India, it’s widely used as a digestive aid and condiment as well as in ayurvedic medicine, which is why it also gets called “food of the gods.” My roommate, whose family is from Pakistan, says asafoetida is what makes Indian food taste Indian. In 2016, NPR called hing “the secret-weapon spice of Indian cuisine,” citing that “many Indians use hing to add umami to an array of savory dishes.”

Soon my sisters and I noticed that my mom put hing in so many savory dishes. Dal? ¼ teaspoon of hing. Pav bhaji (think: vegetarian, Indian sloppy Joe)? Another ¼ teaspoon of hing.. Chana masala (a.k.a. chholay)? A shake or two of hing.

My parents say it’s best not to overdo it with hing as some people say it smells like sulfur and onions. They keep a bottle of it in a corner cabinet, on a Lazy Susan next to my mom’s masala dabba, a round stainless steel container that has smaller round tins for spices. So in every recipe where she uses hing, she’ll add cumin and/or mustard seeds from the masala dabba.

Like Priya Krishna wrote in Bon Appetit, hing must be dissolved into a hot oil or ghee, in order to capture its full funky, umami-y qualities. Take for example my mom’s chana masala. She starts by cooking 1 cup of dried chickpeas in an aluminum pressure cooker. In a medium saucepan, she heats canola oil. From the dabba, she spoons in mustard seeds, ground cumin, garam masala, salt, and then, drumroll, please, she sprinkles in hing. My mom then adds in ginger, jalapeño, and tomato. Once the chickpeas are tender, she mixes them in the saucepan, finishing the dish with fresh cilantro and jaggery, a cane sugar you’ll also see in South East Asian and East African cooking.

I was able to order a bottle of hing online. Now, when I’m cooking chana masala the Indian way I shake a little hing on top of the toasting spices, watch it disappear into the hot oil, and think of my family laughing and cooking together in the kitchen again.

The author, with her family, reunited after over a year.

A Masala Dabba filled with spices is an essential for Indian cooking. This one lets you choose your spices from a list. If you need guidance on what to choose or want to build you own, read on for my mom’s picks.

First up, chilis. These peppers are smoky, fiery, and have slight tomato-y flavor.

You’ll also need coriander and this one, with its lemony and crisp flavors is praised by reviewers for being plump and especially fragrant.

Where there is coriander, there must also be cumin.

You’ll want a good turmeric with a vibrant hue, like this one.

When these get heated up, you’ll hear them pop and release an aromatic oil. It’s a key ingredient in my mom’s chana masala.

Featuring a blend of nutmeg, cumin, cinnamon, and other warming spices, this is another key spice to put into your Masala Dabba.

Get a pressure cooker and you’ll never have to wait for your chickpeas to cook through again.

This tea is made with fannings, which are coarse tea dust that brew faster than full leaves. My mom uses it to make strong chai.

She’ll mix this in to create her strong chai.

One of the snacks I learned to make was batata poha and one of the key ingredients is this rice.

While I learned how to make chutney from my mom, this jarred stuff is delicious as well.

Everything You Need For Memorial Day Weekend, According To The Infatuation Editors
It’s the first post-social distancing holiday, so make it a good one.

The Absolute Best Father’s Day Presents For Food and Drink Loving Dads
From a set of Opinel table knives to a homebrew kit so your dad can make his own IPAs, these are all guaranteed hits.

Cook Like A Restaurant: How To Make Mister Jiu’s Prawn Toast
The iconic dim sum dish is a perennial favorite at the San Francisco spot.

I Have A Massive Google Sheet Of Everything You Need For Your First Kitchen, Here’s What’s On It
All the things you need to eat and drink at home, from plates to cookware that doesn’t suck.