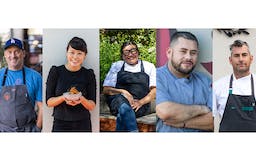 No matter where you are or who you’re with, Thanksgiving is going to be different this year. And we’re all going to have to get creative. So look at it as a chance to take a new spin on Thanksgiving. For the holiday this year, a number of Los Angeles chefs are celebrating and blending different cultures while showcasing local ingredients, resulting in some unique meals you won’t want to miss. They’ll be available for purchase and we’ve also got the recipes in case you want to be ambitious and make these yourself.

Here’s a look at five limited-time-only Thanksgiving-inspired dishes from five LA chefs who know that great things can happen when you combine tradition with a fresh point of view.

Stella Artois believes in enjoying every pleasure life serves up, with the people who matter most. So even if you’re not gathering for the holidays this year, take a longer walk, call your family, and don’t skip the next Zoom happy hour with your friends - complete with a Stella Artois.

At first, chef Vivian Ku wasn’t sure about how to weave in Thanksgiving food into her Taiwanese menu. “People don’t celebrate Thanksgiving in Taiwan,” she says.

But she thought it over and realized that sweet potatoes are the answer. “There’s a version of candied sweet potatoes that’s super traditional and super fun in Taiwan,” Ku says. “Sweet potatoes also have a unique place in Taiwanese food. It makes so much sense.”

For more about Vivian Ku, visit the James Beard Foundation.

“I wanted it to have a little bit of an Italian quality,” chef Steve Samson says of his turkey thigh al mattone. This dish is a Thanksgiving-friendly nod to the brick-pressed chicken he’s become known for. Samson is serving turkey thighs because he prefers dark meat over white meat, and his chestnut-sage stuffing includes marsala.

Samson uses leftover bread for the stuffing, but he stresses that stuffing is very forgiving. He’s made stuffing with King’s Hawaiian bread and challah in the past, and everything turned out great. When he cooked Thanksgiving food alongside Michael Voltaggio at the Los Angeles Mission in Skid Row, he made stuffing with sliced white bread.

“Even Wonder Bread would work fine,” Samson says. “The bread is just the thing that holds it together.”

For more about Steve Samson, visit the James Beard Foundation.

Steve’s dish is available here from November 18th to 25th.

For chef Minh Phan, the day after Thanksgiving is special because it involves eating porridge. Porridge, of course, is a great dish to make with leftovers, such as a turkey carcass or ham bones. So for her meal, Phan will serve both a stuffed pork loin and some ultra-comforting porridge.

If you’re cooking this at home, Phan thinks a small pork loin makes sense in 2020 because many Thanksgiving gatherings are going to be relatively tiny this year. And the point of the porridge is to use any leftovers you want to put into it.

“For the day after Thanksgiving, my philosophy is about using everything in the fridge,” she says.

For more about Minh Phan, visit the James Beard Foundation.

Minh’s recipe is available from 12-2pm on November 16th.

Chef Marcelo Garcia’s riff on Thanksgiving food is inspired by his mother’s cooking. He remembers her Thanksgiving feasts with squash instead of candied yams and how she would use dulce de leche instead of marshmallows. He wanted to be similarly imaginative with this dish, which has a focus on Oaxacan ingredients.

The result is a pork tenderloin stuffed with pechuga de mezcal and fruit from Oaxaca. Garcia is using fresh fruit like apples and peaches along with raisins for his pork dish, but feel free to select your own autumn-friendly produce if you’re making this dish at home.

For more about Marcelo Garcia, visit the James Beard Foundation.

“I was always into the French fine dining,” says chef Kevin Meehan, who has worked at classic French spots in the past, but more recently has been known for his love of California ingredients.

So when Meehan was coming up with a Thanksgiving dish, he thought about autumn flavors but also about putting his money “toward the vendors that are struggling the most during this pandemic.” He decided to buy Liberty duck breast from Sonoma County Poultry and cook it with autumn spices, Schaner Family Farms squash puree and other autumn produce including figs.

“The inspirations for the dish are obviously seasonal and autumn, as well as that my heart’s into it,” says Meehan, who’s noticed that business has been slow at farmers markets during his recent visits. He’s thankful that he’s able to do his part and continue supporting California farmers.

For more about Kevin Meehan, visit the James Beard Foundation.

Kevin’s dish is available from November 16th to 25th.