Erin Ng
May 12, 2021
Squirrel Fish Kept My Family Connected During the Pandemic
Plus, where to find it in the Bay Area.

I grew up associating squirrel fish with the sweetness of reunion. Whenever my parents and I flew from California to China to visit extended family, it would undoubtedly be the centerpiece of our first meal with relatives – usually prepared at home as a labor of love by my uncle, an excellent cook who considers squirrel fish his specialty.

Hailing originally from the city of Suzhou in eastern China’s Jiangsu Province, squirrel fish (松鼠桂鱼, sōngshǔ guìyú) is a representative dish of the region’s celebrated cuisine, which is known for its vibrant colors, artistic presentation, and emphasis on fresh seafood. It does not, however, include squirrel, rather deriving its name from the shape in which it’s arranged. 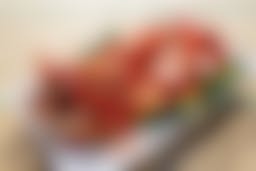 Squirrel fish’s reputation in China as a celebratory dish stems from its intensive preparation, ornamental shape, and it, of course, being delicious. The process involves complex scoring of the whole fish, then dipping it in starch and frying – which accentuates the elaborateness of the scoring, with bite-size pieces of fish jutting out like scales on a pine cone. The meat is then arranged in its namesake design with the head and tail placed upright at either end of the platter so that it almost resembles a playful squirrel. To finish it off, the fish is drenched in a gravy that’s equal parts sweet and sour from a mix of vinegar, tomato sauce or ketchup, and sugar, before sprinkling green peas and pine nuts over top.

When the pandemic halted all travel plans, my family had to cancel a trip to Jiangsu that would have reunited us with our extended family once again. Needless to say, it’s been more than a year since we’ve seen them. I miss my grandmother and the stories she always tells me about my dad’s childhood. I miss the diverse and delicious food available on seemingly every street. But, of all the dishes in China, I miss squirrel fish the most. It’s one of the richest, most decadent things I’ve ever had, but more than that, for us, it signifies togetherness.

In the absence of travel, I embarked on a quest to find squirrel fish in the Bay Area. Though there are plenty of restaurants here that serve food from China’s Jiangnan region (the geographic area south of the Yangtze River’s lower reaches, which includes the city of Suzhou), not every place that prepares this style of food serves this specific dish. It’s also traditionally made with mandarin fish, which can be difficult to source in the US. But there are a few places that do proudly serve it, often using tilapia or rockfish as a replacement - but still spotlighting those same rich, sweetly sour flavors that are so familiar to my family. Until travel safely resumes, we’ll visit these restaurants for those nostalgic flavors, and to relive the feeling of reunion, from afar.

4 GREAT SPOTS FOR SQUIRREL FISH IN THE BAY AREA

Located in a Cupertino strip mall, Shanghai Garden specializes in regional dishes from Shanghai and the surrounding region. The menu includes pan-fried pork buns, vegetable-and-salted-pork rice, stir-fried rice cakes, and of course, squirrel fish. Made with rockfish here, the dish manages to stay equally crispy and saucy. I recommend balancing out its rich flavors by ordering a few lighter vegetable dishes to go alongside it – such as sautéed snow pea leaves, or celery with lotus root and lily bulb. 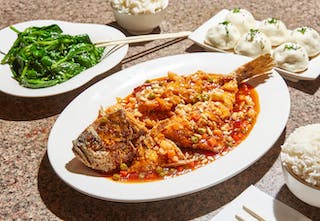 Though this family-run restaurant in Pleasanton is named after Shanghai, the menu also heavily features the signature spicy dishes of southwest China’s Sichuan Province. In one meal, you can get a taste of the contrasting flavors of these two regions: try mapo tofu for the mouth-numbing spices of Sichuan, and braised pork belly in brown sauce for a lighter, mildly sweet taste of the greater Shanghai region. This place also makes a great squirrel fish using tilapia and topping it with shrimp for a little something extra.

A popular spot for lunchtime bento boxes, this casual Sunnyvale spot serves all kinds of regional Chinese dishes - from griddle-cooked cauliflower and duck-and-bamboo-shoot soup to clams with black-bean sauce. Also on the menu is squirrel fish, which is artistically scored before deep-frying in a luscious batter. The presentation is so ornate that you’ll probably want to take a picture before digging in. 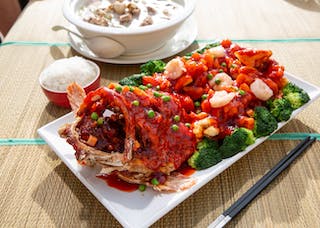 Don’t be confused by the name - Gangnam refers not to the famous South Korea neighborhood, but to the Jiangnan area of China (in their respective languages, both Gangnam and Jiangnan translate as “south of the river”). At this Milpitas restaurant, you’ll find lots of signature regional dishes, including sweet vinegar pork spare ribs, Dongpo pork belly, and braised lion’s head meatballs. The squirrel fish here must be pre-ordered, so it’s worth it to put in a call beforehand for the dish.

Where To Celebrate Your Birthday Now That You Can Actually Leave The House
Because one Zoom party was enough.

7 New Things To Do & Eat In San Francisco This Week
The chocolate sourdough, taco pop-up, and new bakeries you should check out this week.

17 Quiet Patios Because This Is All Still A Bit Much
Where you can eat and drink in San Francisco in peace.