You’ve probably heard of Honey Mahogany from RuPaul’s Drag Race - she was a Season 5 contestant and the first queen from San Francisco to make it onto the show, kaftan and all. But appearing nationally on one of TV’s most influential reality competition series isn’t her only claim to fame.

The San Francisco native and fixture of the local drag scene is also an activist, organizer, and politician with a deep love for her community. Back in 2016, she, along with 15 others, famously united to save The Stud, (though, sadly, the historic LGBTQ bar closed permanently last year). She also co-founded the world’s first legally recognized transgender district in the Tenderloin a year later, and more recently has been working as the legislative aide to Supervisor Matt Haney. Last month, she added another title to her growing resume - she was elected chair of the San Francisco Democratic Party, and is the first trans Black person to hold the position. Did we mention she sings national anthems at Giants games, too?

We recently chatted with Honey about the city’s nightlife community and The Stud, and to hear about her favorite spots in SF.

Lani Conway: Congrats on becoming the new chair of SF’s Democratic Party. How are you feeling?

Honey Mahogany: Deeply honored and also slightly overwhelmed with the amount of work that comes with being chair. But it presents an incredible opportunity to diversify not just the face of the Democratic Party, but also the work that we do and how we pull people into politics. The Democratic Party has an opportunity to say we are the party of inclusion - and we don’t all think alike and we’re still going to have to have tough conversations - but we want to create a safe space where everyone is welcome and has an opportunity to engage.

LC: This year has been wild, to say the least. How has the pandemic impacted the communities that are important to you?

HM: I come from a nightlife community, and it’s been really, really hard on a lot of bar owners, and people who work in the bar industry and restaurants. But what’s been amazing to see are the ways the city has looked to meet the needs of the community - local anti-eviction laws, on top of state laws, and we established a San Francisco nightlife fund to help those venues make it through the pandemic. We’ve lost The Stud and Slim’s and so many other venues across the city. We didn’t want to see that erode. Nightlife is a real anchor for our city’s economy.

LC: You’re a member of The Stud Collective. Have you found a new home for the bar?

HM: We have not found a space yet, but we are absolutely actively looking at considering different locations. I think we would love to stay in SoMa and continue the 54 year legacy The Stud built there. But we’re also open to moving to the Tenderloin. What’s important to us is maintaining the spirit of The Stud, and creating a place that is celebratory and fun, and where the freaks can let their flags fly.

LC: Tell me a bit about the kinds of spots you’ve chosen to highlight today.

HM: I wanted to call out bars in different queer neighborhoods in San Francisco that speak to the San Francisco ethos and are places where people of different backgrounds can feel welcome - although I will say that “welcomed” doesn’t always mean comfortable, for example, Powerhouse. But we can get into that.

As told to Lani Conway.

The Stud is closed, but I couldn’t do any list without mentioning it. It’s the country’s first collectively-operated LGBT nightlife venue, and has played such an important role in my life, and the life of San Francisco. Long before it was popular to do so, The Stud proclaimed and made evident that everyone was welcome, whether you were a man or woman, trans or cisgender, a person of color or white... [It was a] space that was inviting and celebratory of everyone - and that string has carried through from 1966 when The Stud opened through to today. I hope to see that legacy continue. Like I said, we’re continuing to look for a new space. Hopefully, not too long after this article is published, we’ll be able to announce that.

Powerhouse is a kink- and leather-centered space that has become relatively infamous. It has many themed nights that, I would say, push the boundaries of nightlife. It is not for the faint of heart. In recent years I do think it’s become more welcoming of diversity and celebratory of diversity. Some of my favorite people go there regularly, Mr. David, Juanita More, Sister Roma - all of them have produced events there. Powerblouse is super cool. It’s an event where someone will get dressed up in drag for the first time and perform. There’s also Pillows, which is a very old-school, San Francisco drag show Glamamore, also known as Mr. David, throws. 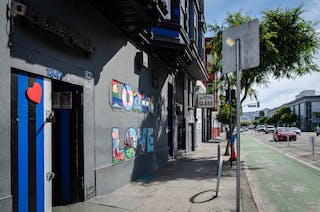 I had a residency at Midnight Sun for five years hosting RuPaul’s Drag Race viewing parties immediately after I was on it, and a weekly drag show called Mahogany Mondays. It was my home bar and they allowed me a lot of leeway to do whatever I wanted - an all-Black cast for Mahogany Mondays to highlight African American talent, or shows where I showcased women performers in the LGBT scene who also oftentimes performed in gay bars. We don’t recognize enough that there are cisgender women and trans women who are really important parts of our scene. Creating those spaces in the Castro, which historically has been criticized for being very white and very cis male-oriented was really cool. Midnight Sun has continued that focus of reaching out to POC communities and performers.

Moya is an Ethiopian restaurant on Ninth Street. I’m Ethiopian and I love good Ethiopian food. I grew up with my mom’s good home cooking, so one thing I struggle with is the ways in which certain Ethiopian restaurants Americanize Ethiopian food to better suit American palates. I don’t think that’s the case with Moya. It’s a family-run business and everybody is super friendly. One of my favorite things on the menu is the kitfo, which is a beef tartare dish that’s so delicious. It is traditionally eaten raw, but you can get it cooked to your satisfaction, like steak. If you want it well done, you can get it that way. But that’s not the authentic way.

El Rio has one of the best patios out of any of the queer spaces in San Francisco. And I love it because there are so many wonderful parties that have happened there over the years that center queer, POC audiences. My favorite is Swagger Like Us, and Swagger is actually having a Pride party there this month, so I’m super excited for it to come back. Of course, there are also El Rio’s infamous palomas, which are absolutely delicious, cheap, and strong. 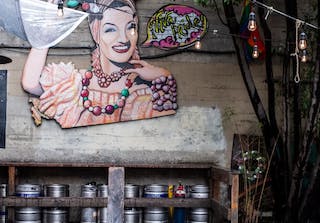 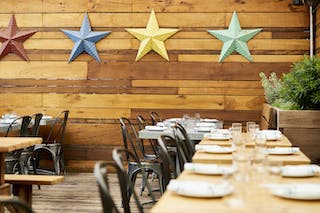 Like The Stud and Powerhouse, the SF Eagle is part of the Miracle Mile, a strip in West SoMa with a lot of LGBT leather businesses. It’s one of the oldest remaining leather bars in the neighborhood, and their space has historically been used for fundraising, specifically around HIV and AIDS causes during the height of the epidemic. They have an amazing outdoor patio and they host the infamous weekly Beer Bust on Sundays as a fundraiser for local non-profits. It’s also one of the few queer spaces in San Francisco that’s set up for live bands.

Aunt Charlie’s is a hole-in-the-wall bar and not fancy, but that’s why it’s special. It’s a historic venue, and the last queer one left in the Tenderloin. The drinks are cheap, and you’ll never know who you’ll run into. [Some of my favorite memories are] going to see shows that were the epitome of San Francisco drag - all sorts of characters, super glamorous queens - some of them were really busted, but amazing performers. And then there were the real legends of the Aunt Charlie’s scene, like Gina LaDivina. I never got tired of watching her do Shirley Bassey. She was completely flawless and stunning performing in this tiny, dark, slightly rundown bar. It was magical seeing the juxtaposition of this glamorous performance in a highly unglamorous space. 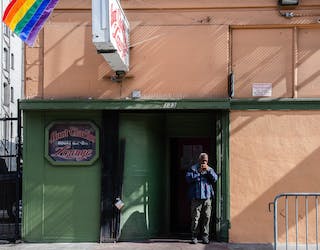 20 Cute, Chill SF Spots Perfect For Catching Up With A Few Friends
When you want to keep it lowkey, head to these restaurants.

Where To Eat & Drink On Your Napa Road Trip
A few great stops to make on your way up north, plus where to eat once you get there.

9 New Things To Do & Eat In San Francisco This Week
The special pizza collab, pop-up market, and waterfront live music you should get into.

5 New Things To Do & Eat In San Francisco This Week
Check out a new brewery in Mission Bay, hike with cows, and more.