In a world where building codes are required to keep developers from making closet-sized apartments, it’s no surprise that many of us live in relatively small spaces. You might only have one room — also eloquently referred to as a “studio” — that you choose to reside in, or you might just have a kitchen that abruptly decides to be a living room too. It can obviously be a challenge to furnish such a space, but that doesn’t mean you can’t have something as essential as a dining table.

If you don’t have a ton of room but still want somewhere to sit and eat a meal, here are your best options. A lot of these tables are round (because that shape makes sense for tight spaces), but there are also a few counter-and-barstool options as well as some expandable furniture for anyone who wants to feel like they’re living in the future. And if you’ve ever wondered where those ubiquitous molded plastic chairs came from, keep scrolling for a short history lesson. 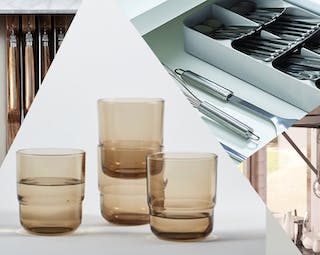 How I Organized My Small NYC Kitchen 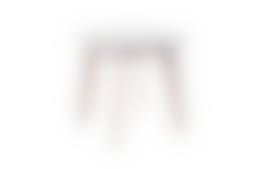 Small-space living is all about finding the right workaround. You probably won’t be able to fit a big table in your kitchen, for example, but you can still get one that fits four people — as long as it’s round. Just take a look at this option. A lack of corners means a more efficient use of space, and, while it’s most comfortable for parties of two, you can technically seat four people around this thing. The construction is also pretty solid, and if you accidentally ding up the white finish, you can just throw a tablecloth on top. No one will know.

Something To Match Your Chairs 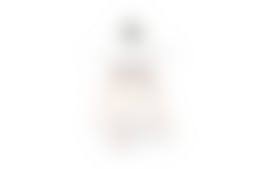 The concept here is pretty much the same. This table is white and round, and it also has plenty of room for two people (but can fit four in a pinch). It is, however, a little bit smaller than the previous table (31" across, as opposed to 35.4"), so it’s better for super tight spaces. As an added bonus, the Milliard Dining Table will also match those Eames-inspired molded plastic chairs that you almost definitely own or are thinking about owning.

The Chair That's Everywhere (For A Reason) 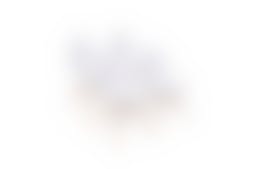 Speaking of Eames chairs, here’s a quick history lesson. The year was 1948, and, as housing construction lagged behind post-war demand, the MoMA decided to hold a competition for low-cost furniture geared toward families who “found themselves in smaller homes than had been usual.” Enter Charles and Ray Eames, along with the molded fiberglass chair. Their entry only tied for second place — but, today, its influence is everywhere. The chairs pictured above, for example, are direct descendants, and you’ve probably seen similar chairs... in most places. There’s a reason why these are affordable, attractive, and perfect for small spaces. (That’s what they were designed to be.) 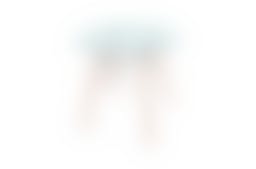 Prefer a table with a glass top? If so, we see where you’re coming from. Glass will hold up better than most affordable wood furniture (typically fiberboard), and it provides a more modern, grown-up look. This table is 34.25" across, so it fits up to four people, and it’s received plenty of glowing reviews.

Get Nidouillet Round Glass Dining Table ($130) →

Where To Drink Coffee Every Morning 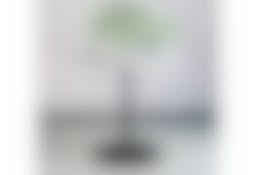 For a slightly different feel, here’s a faux-marble option from Nathan James. With a 31" diameter, this is perfect for a two-person dinner party or a solo breakfast in an especially sunny corner of your kitchen. The podium base also provides a bit more room than standard four-leg models. 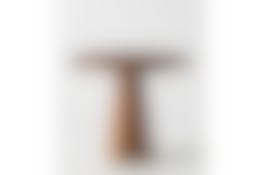 Let’s say you’ve committed to the small-space lifestyle, and you want to get a dining table that you’ll hang onto and show off to your guests for years to come. In that case, you’re probably willing to spend a little more money. Anthropologie’s Quillen Marquetry table is made from several kinds of lacquered wood, with brass accents and a wide herringbone base. At 36" across, it’ll also easily accommodate four people.

A Counter With Storage 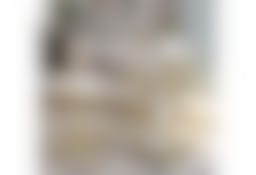 Tables aren’t your only options. You can also eat at a counter like this one. The benefits are twofold: your stools (included with this set) will tuck under the counter for space-saving storage, and the counter’s skinny frame won’t take up a whole room. Grab this, and you’ll even get some extra storage in the form of shelves. (Choose from wood or faux marble.) 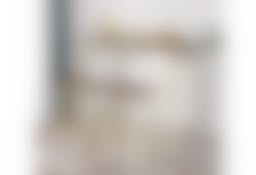 An even simpler route, this counter is about as straightforward as it gets, and it’ll have roughly the same footprint as a desk. If you need more selling points, reviewers have called this “great,” “sturdy,” and “excellent for the money. Also, you can hang the stools underneath when they aren’t in use (which is something you just can’t do with chairs). 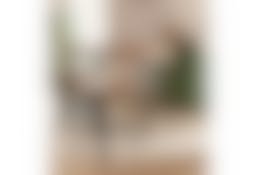 Need something a little more deluxe? This counter is pretty much the same as the one listed above, but, instead of rubber wood and fiberboard, it’s constructed of iron and mango wood. Throw it against a wall, or use it as a mini kitchen island when you aren’t sitting down for a meal.

The One That Seriously Expands 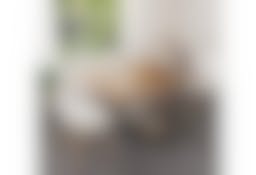 If you think you don’t have enough space for a big dining table you’re.... probably wrong. We say that because this table expands to a full 55.1". Fold down one side, and you have a desk (or a smaller dining table). Fold down both, and this piece of hybrid furniture essentially becomes a cabinet that can rest against a wall without feeling cumbersome. 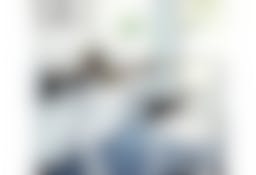 This table looks like a desk, and that’s because it is a desk. Or, rather, that’s one of the things it can be. The drop-leaf design lets you expand the surface area whenever you have company over, allowing up to six people to eat dinner without jabbing one another with their elbows. 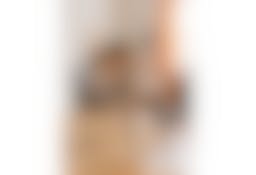 You wouldn’t suspect it, but this table expands. There’s a 12" section hidden underneath that pulls up and brings this thing to a full 54" long (enough room for six people). So if you’re looking for something that doesn’t immediately scream “small space solution,” this is a great route. The material is solid rubber wood, so you won’t have to worry about the chips or warping you tend to get with fiberboard.

If You Just Want A Big Rectangle 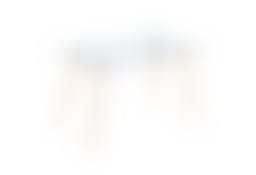 Finally, if you have your heart set on a standard rectangular dining table — despite the fact that you don’t really have room for one — go the glass route. Glass is, obviously, less visible than wood or marble, so it won’t make it seem as if you’re trying to fill your apartment with as much stuff as humanly possible.

Everything You Need to Host Rosh Hashanah
Celebrate the new year in style.