May 24, 2021
Cook Like A Restaurant: How To Make Mister Jiu’s Prawn Toast
The iconic dim sum dish is a perennial favorite at the San Francisco spot.
KH
Written by
Kathleen Hou

For all the times you’ve thought, wow I could totally go for [insert name of your favorite restaurant dish here] only to realize that reservations are impossible to get, this new series is for you. Cook Like A Restaurant is dedicated to giving you the recipes from the places you love along with the tricks to make it taste as close to the restaurant’s version as possible.

First up, is Chef Brandon Jew of Mister Jiu’s and co-author, along with Tienlon Ho, of the cookbook, Mister Jiu’s in Chinatown: Recipes and Stories from the Birthplace of Chinese American Food. At Mister Jiu’s, you’d be hard pressed any day to find any diners who aren’t happily enjoying the shrimp toast. Most frequently described as a must order, the appetizer is a blend of richness and satisfying crunch, and inspired by the Hong Kong dim sum dish. Allegedly, shrimp toast first originated in Guangzhou, and then made its way to the U.S..

Chef Jew says, “Shrimp toast came about at a time when people were starting to do entertaining at home. It was a popular appetizer that really exemplified Chinese-American cuisine, using white bread and a very versatile filling that usually would be utilized for dumplings.” Here are his tips for recreating the dish perfectly at home.

When Chef Jew was developing the Mister Jiu version of the shrimp toast recipe, he researched recipes by Chinese cooking legends such as Irene Kuo and Florence Lim. He decided that his version would be a little different. Unlike traditional deep-fried shrimp toasts, the one at Mister Jiu’s would be shallow fried, so that it would be shatteringly crunchy, without being greasy.

“When I teach the dish to our cooks, I tell them that we want a golden brown color, much like the shallow fry you get with a grilled cheese.” To do that, you need to carefully monitor the amount of fat and heat. Also, don’t constantly flip the toast. “Shoot for getting one whole side nice and dark,” Jew says, and then you can flip to the other side.

Be A Little Frightened

The other common mistake chefs make is pulling the toast too early, when it hasn’t fully reached its golden brown potential. Typically, you can really take it to the edge, says Chef Jew. “If you’re a little scared that it is getting too dark, it’s close to getting ready to turn over.”

Don’t substitute. As Chef Jew simply says, “Putting shrimp in pork fat it’s a yummy thing.” But if you must, he says that clarified butter, or rendered bacon fat works as well.

Don’t Make It Too Smooth

Part of the appeal of this dish comes from the play in textures. You get the crispiness of the toast paired with some in the filling and the sesame seed topping. “Texturally, the jicama or water chestnut gives it that crunch,” he explains. When combining the shrimp mix in the food processor, be sure to pulse it in very short bursts so that the emulsion doesn’t break.

“You don’t want it super smooth,” he explains. “Don’t just let the machine run. The parts will heat up, and the shrimp will then start to lose more texture, and you’ll keep losing more of it.”

Much like with making French toast, mature bread makes for better shrimp toast. “You need the toast to be stable, so you can spread the filling on top,” he explains. Usually in the restaurant, Chef Jew and his team will bake off loaves and let them linger in the fridge for two days (wrapped in plastic).

“It’s better to have bread that is a little stale,” he says. If you don’t have any, you can put your bread in the fridge and it will be perfect for shrimp toast the next day.

Read on for the recipe.

For the Lemon Aioli

For the Prawn Mousse

To make the aioli:

To make the mousse:

To Make The Prawn Toast

If you want more of these recipes, be sure to get a copy of the cookbook.

Get Mister Jiu’s in Chinatown: Recipes and Stories from the Birthplace of Chinese American Food by Brandon Jew and Tienlon Ho ($37) →

Grapeseed oil is key to making the mayo for this dish. Our Editorial Operations Manager Jess Basser Sanders is a fan of this one.

This recipe calls for Chinese light soy sauce, which you shouldn’t confuse with low sodium soy sauce. The “light” refers to the color, a reddish brown, and this sauce is usually made from the first press of the fermented soy beans.

If you need sesame oil, this is a good choice. It’s nutty and rich. 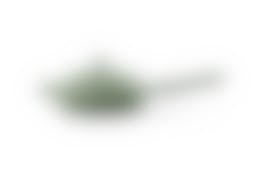 For a good toast, you’l want a non-stick frying pan that can be used over medium heat. That sounds like a job for the Our Place Always pan.

Slice your jicama and green onion perfectly with a sharp chef’s knife. This one was recommended by Chef David Nayfield of Che Fico and has a pleasant balance to its weight.

Making a smooth shrimp mousse will require a good food processor. This one is top-rated and affordable.

After all your hard work, you’ll want to show the prawn toast off on a nice plate like this one from East Fork.