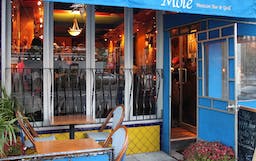 There isn't much in the way of Mexican to choose from in this town, so to some extent, I can understand why Mole gets good reviews. It's a charming enough little spot - a handful of tables, walls painted in vivid colors, Spanish tiles...all the necessary trimmings for a "family run" Mexican restaurant. Considering that most other Mexican joints around town either double as Chinese food restaurants (see Happy Taco) or downright suck, I get why Mole receives some love. The margaritas are good, and after a few, that guacamole is pretty slammin'. However, the food is average at best. In addition, it's not cheap, it's cash only, and the quality of service varies wildly from visit to visit. It's almost like the restaurant equivalent of a bipolar kid with a really nice boat. You want to like him, and you give him a few chances, but you don't want to hang out on a boat with someone that unpredictable. At the end of the day, there are other places to better satisfy your Mexican cravings than Mole, and they don't require you to hit an ATM like you're about to board a plane for Vegas. If you're looking for some quality Mexican, head to Mexico Lindo instead.

I ate at Mole on a recent Monday evening and they were out of salsa. Salsa. At a Mexican restaurant. Looking good out there team.

It's tough to be mad at tableside guacamole. This is a good one. The medium has some kick, so if you're averse to spicy foods (weird that you're eating Mexican) go for the mild.

This is one of two taquito dishes that were recommended to me by a waiter. In my opinion, that's kind of like telling someone you make a mean Hot Pocket. These appetizer taquitos are filled with potato and chorizo, and are tasty enough. At $8 though, that's four bucks per taquito.

I love tortilla soup, but this one is tomato based and not my thing. After a while it just starts tasting like plain old tomato soup.

A curious preparation for a chile relleno - these poblanos are flat and a little soggy from the tomato sauce they float in. The flavor isn't bad, but when I think chile relleno, I think big pepper with a crispy outside.

The other "don't miss" from the menu according to a staffer, these taste almost exactly like the appetizer taquitos, even though they are filled with your choice of chicken or beef. Out of all the options, the beef is far and away the best, but they're still just taquitos - and now they're $5 each at three for $15. I don't like that math.

These enchiladas are probably the best thing I've eaten at Mole, which would make sense being that the restaurant is named for the stuff. The mole sauce has a strong chocolate flavor, and is rich and delicious.

I love corn on the cob Mexican style, and Mole has it down. The lime and chili powder on the side is a fantastic addition to grilled corn with cotija cheese.