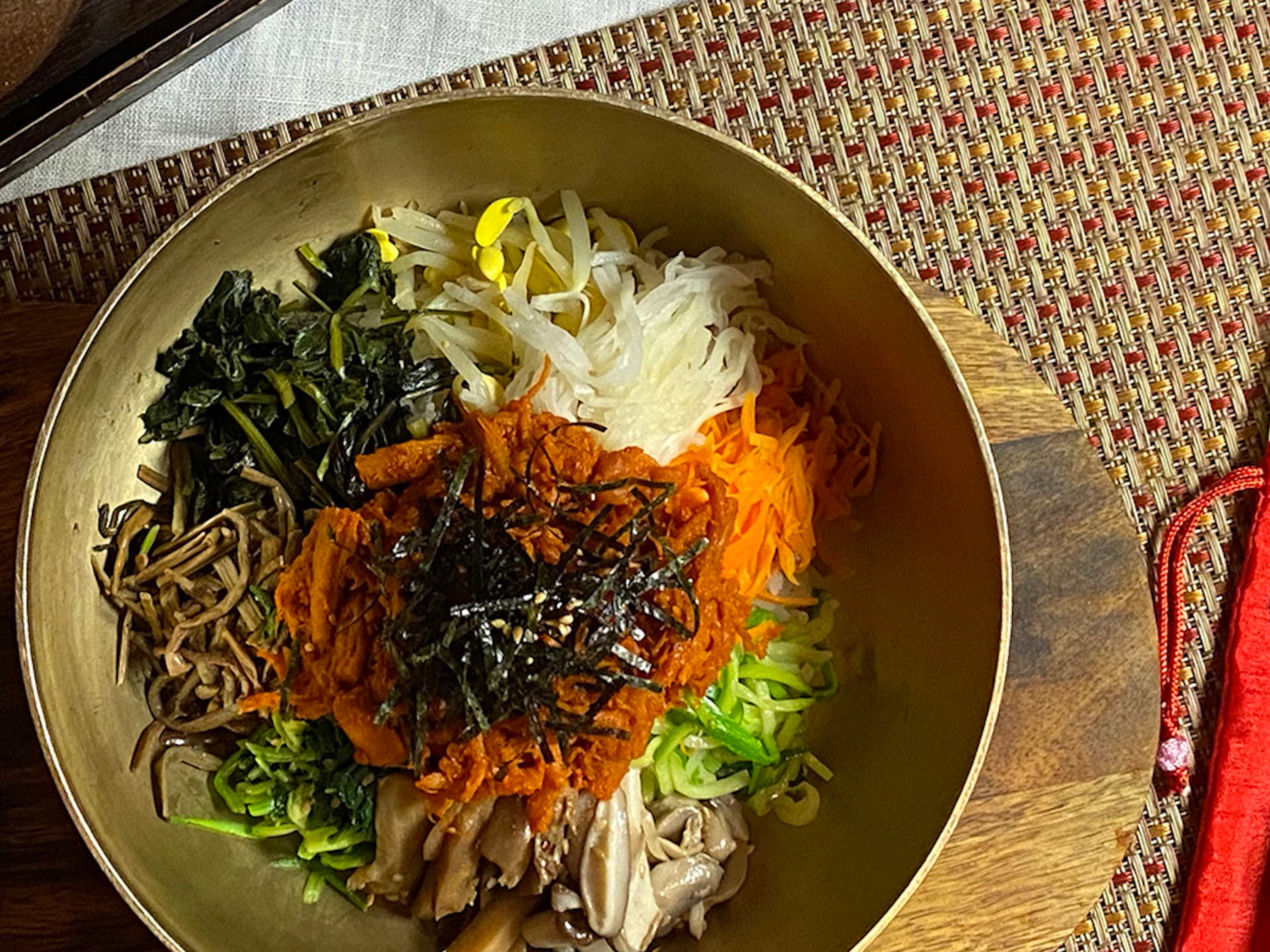 My journey with vegetarian and vegan food began in Los Angeles and left an imprint on me ever since I moved back to New York. I kicked some bad habits and explored proactive ways of reducing food waste at home, as well as being more selective about the type of food I eat and the restaurants I support. I can’t say I’m a vegan, but I’m definitely making strides to be more conscious of what I eat.

Once I got back to New York, I found that there are plenty of delicious and vegan-friendly options located all around the city, from the Upper West and Lower East Side to Downtown Brooklyn and beyond. My hope is that this guide might inspire you to explore these restaurants that serve both delicious vegan-friendly dishes, and also happen to be Asian-owned. From places serving diner-style comfort foods like waffles with veggie tenders to spots cranking out sizzling hot plates of black pepper seitan, drunken noodles, and samplers of dim sum, here are 10 Asian-owned restaurants that you’ll enjoy whether you’re vegan or not.

With Warm Welcome is a community organization that amplifies and humanizes Asian American chefs, restaurateurs, and founders by producing podcasts, crafting meaningful experiences, and collaborating with artists. It’s become ever more apparent that we need to find ways to advocate for Asian-owned small businesses as they’ve been the hardest hit during the pandemic. In partnership with The Infatuation, we’re spotlighting some of our favorite Asian-owned businesses to support now and forever.

Justin Henry Lee is Chinese American and chef/owner of Fat Choy located on the Lower East Side. Lee created Fat Choy to help decrease harmful industrialized farming practices and ocean pollution by making vegan food both delicious and accessible. The name “Fat Choy” is part of the colloquial greeting to wish someone health and prosperity in the new year: “Choy” is synonymous with vegetables, and since Fat Choy is a fast-casual restaurant, they want to make customers “fat with vegetables,” according to Lee. The menu is made up of familiar Chinese-flavored dishes but reinvented as vegan fast food, like longevity noodles, salt and pepper cauliflower, sticky rice dumplings, and more. Order my favorite mushroom sloppy sandwich and smashed cucumber together - the fresh and crisp sesame-dressed cucumbers help cut the fat and balance the flavors of the rich sloppy mushroom ragu.

Shuichiro Kobori is Japanese and the owner of Kajitsu (meaning “fine day” or “day of celebration” in Japanese) in Murray Hill. The menu consists of Shojin cuisine, which is all about vegetarian cooking that originated in Zen Buddhism. As soon as you walk in, you’re greeted with a striking Ikebana-style piece of art, warm wooden panels, and a cozy seating area. All of their dishes come on Japanese handcrafted ceramic plates and any takeout orders include a floral surprise. My idea of a perfect evening would be spent dining at Kajitsu’s top floor window side, sharing the Shojin bento box and tenjyu tempura, namafu dengaku mochi for dessert, and ordering a Kajitsu roll to go.

Be the first to get expert restaurant recommendations for every situation right in your inbox.

With her Times Square restaurant P.S. Kitchen, Hong Kong American and co-owner April Tam Smith wanted to create a sustainable business model that powered her charitable goals all while creating good in the world. To do this, she donates restaurant profits back to the community through nonprofits like Defy Ventures, Restore NYC, and Justice Rising. P.S. Kitchen is also passionate about second-chance hiring for staffing, and serves a full menu of plant-based dishes. While salads rarely excite me, the golden beet salad is fresh and delicious with the balsamic vinaigrette dressing mixed with lots of microgreens and bits of dairy-free feta cheese. It’s surprisingly filling and would be perfect to share with a friend before diving into entrees like the Smoky BBQ Burger made with Beyond meat, portobello mushrooms, caramelized onions, and pickles on a pretzel bun.

From starting a street food cart in Bangkok in 1988 to operating six restaurants at a time, Sommay Jaijong is now in the process of rebooting her East Broadway restaurant May Kaidee to provide indoor dining at a higher capacity. The menu offers a combination of flavors ranging from the Isaan province, Central Thailand, and Southern Thailand. If you like curries as much as I do, order the panang curry with a side of brown rice and a hot Thai tea. The coconut milk in the curry pairs nicely with the makrut lime leaf, and while it has a bit of a kick to it, it’s manageable when eating spoonfuls of rice with the peppers and carrots and washing it down with a mug of milky homemade Thai tea. I also love the drunken noodles: a mountain of wide rice noodles sauteed with Thai chili, black soy sauce, Chinese broccoli, bell peppers, and baby corn on a large plate shareable for two.

Spicy Moon is a vegetarian Szechuan restaurant owned by Nick Wang with locations in both the West and East Village. The menu includes traditional Szechuan dishes like dan dan noodles, but with the option to add Beyond Beef, mapo tofu, and my personal favorite: steamed eggplant with pepper sauce. You can taste the heat and flavor from the mala chili sauce in every bite of the eggplant. Order this on the side while piling chopsticks full of dan dan noodles into your mouth. Spicy Moon is also currently donating meals to homeless shelters, community refrigerators, good shepherd services for youth, and low-income students in local NYC schools.

Govinda’s Vegetarian Lunch is owned by the International Society for Krishna Consciousness, an institution with over 108 temples around the world. Every temple has a govinda, which is named after the lord who is the protector of cows. This govinda is managed by Bhakta Vatsala, who used to sell eyewear in India and is now running this vegetarian spot in Downtown Brooklyn after his spiritual master convinced him to move from India to New York. The menu includes Indian vegetarian dishes like kofta in a creamy tomato cashew sauce and sesame-crusted tofu with tahini cilantro sauce. If you’re dining in their basement location on Schermerhorn Street, you’ll get your food on nostalgic orange plastic trays cafeteria-style. While the menu changes by the day, if you catch yourself there on a Tuesday, here’s my go-to order: spinach lasagna with a side of oven-roasted cilantro potatoes and a samosa for later. Just know that they’re only open from 12-3pm on weekdays.

For most people headed to Koreatown, the plan will likely involve Korean BBQ. However, William and Terri Choi had a vastly different concept in mind when creating HanGawi. Since they’re both vegetarians, they wanted to open a Korean restaurant that highlighted the environmentally friendly, delicious, and healthy ways people could enjoy vegetables. When you walk in, you’re asked to remove your shoes, there’s calming meditative music playing in the background, waiters are dressed in traditional Korean threads, and there are recessed tables that are low to the ground with room for your legs to stretch. I can’t stop thinking about their crispy mushrooms. Eating this dish, made up of sweet-and-sour-sauce combined with the texture of the shiitakes (both crispy and tender) is like downing a whole bag of chips - once you start, you can’t stop.

Luanne’s Wild Ginger, owned by Xiang Ting Fang, has four locations spread across Little Italy and parts of Brooklyn. They serve a variety of vegan and kosher dishes, like spring rolls, nori wraps, and my absolute favorite, the black pepper seitan sizzler. It’s not only a creative and delicious way to use seitan, but it’s also quite the showstopper when the server brings it out of the kitchen - hot and sizzling off the skillet with smoke wafting through the air. The flavorful seitan is coated in a black pepper garlic sauce, and every bite feels like you’re chewing on pieces of steak. This specific dish was the entryway for me to enjoy this meat-like texture while feeling good about the nutritious factors - seitan has the same amount of protein as meat, and is a good source of iron and calcium.

Peacefood is a vegan cafe and bakery owned by Eric Yu and Peter Lu with two locations - one on the Upper Westside and another in Union Square. The all-day menu reminds me of diner-style comfort food: there’s a soup of the day, waffles with tenders, seitan panini, tempeh sandwiches, macho nachos, pumpkin quiche, Shanghai dumplings, and miso tahini sprout sandwiches. There’s an entirely separate menu for pastries and beverages, but I would go back just for a slice of the light, refreshing, and creamy raw key lime pie and a pot of sencha tea. Peacefood also partners with Support + Feed to provide nourishing, plant-based meals for families, seniors, homeless and domestic violence shelters, food banks, and LGBTQ+ centers in marginalized communities.

The Original Buddha Bodai Kosher Vegetarian restaurant in Chinatown is owned and operated by Lawrence Lao. The menu of Chinese cuisine, made kosher and vegan, has all of my favorite dishes, such as the Buddhist delight and dim sum sampler of har gow, sticky rice shumai, and vegetarian BBQ pork buns. The Buddhist delight is a classic medley of colorful cooked vegetables paired with a tasty light sweet-and-sour sauce over golden crispy noodles. If you can’t make up your mind, the dim sum sampler is a good choice to try a variety of dishes, but I would go with a few friends and order as much as possible by dividing and conquering the full menu.