Dane Isaac
May 4, 2021
Seolleongtang Is The Korean Comfort Food I Crave Most
After a year without it, my family can’t wait to have this Korean bone broth in Ktown again.

During this time marked by grief and illness, I’ve craved ox-bone tail soup, or seolleongtang, which is the ultimate Korean comfort food. As a kid, I used to beg my mom to make it all the time, asking for ‘yoo guk,’ my shorthand for ‘milk soup,’ due to its milky appearance.

Made from ox bones that simmer for hours, seolleongtang is a hearty broth that’s classic peasant food, and there are a few different origin stories behind it. One traces its roots to King Sejong the Great (1397-1450), who, to increase the food supply in Joseon, ordered his court to invent dishes that could feed the maximum number of people using the fewest ingredients. And seolleongtang was born. There’s also a possibility that it started as a beefy soup brought over during the Mongol invasion in 13 BC. Wherever it’s from, it’s a delicious, steaming bowl that’s especially comforting these days.

And even though it’s what I’ve craved the most, it’s a dish I haven’t had the proper way in a long time. Around this same time last year, New York was experiencing the height of the pandemic and my dad, a doctor, lost his sense of smell and taste. It turned out not to be the coronavirus, but a rare blood cancer linked to a different virus, Epstein-Barr.

Throughout his treatment, my family had to avoid eating seolleongtang and so many other dishes because the chemotherapy messed with his sense of taste and smell - even mild cucumber tasted ‘burnt, smoky and acrid’ to him - and seolleongtang is rumored in Korean circles to be bad for cancer patients. 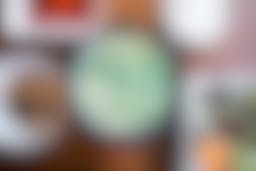 This dish forms the marrow of our memories. Growing up in New York, whenever I returned from college in Boston for winter break, my dad would pick me up at the Megabus stop in Manhattan, and Gammeeok on 32nd Street in Koreatown was always our first stop. After a semester of Korean-food deprivation, we’d step inside the restaurant and be bathed in the warm and familiar smell of the white, beefy broth roiling with bones, onions, and radish for several hours in enormous black cast iron cauldrons.

Served in earthenware bowls, the soup came unseasoned with cuts of beef brisket and thin wheat flour white noodles. Sides of white rice and generous heaps of whole radish kimchi would also quickly appear, but the best part was adding the little spoonfuls of cut scallions, black pepper, and coarse salt on the table to make my bowl just the way I wanted. Seolleongtang was a meal so hearty, it washed away the coldness of Boston and the discomfort of the six-hour bus ride.

We avoided this dish, like so many others, for a year and struggled to find something that my dad could eat during his treatment. Since he’s happily cancer-free this spring, we’ve been greedily eating the soup again. However, we’ve still generally avoided restaurant food, and instead eaten seolleongtang at home via the convenient packets sold by ready-made Korean food company, CJ Bibigo.

Normally, the bones and beef must be boiled at a low-simmer for at least eight hours, but for these times, my whole family swears by CJ Bibigo, which tastes as close as you can get to the real thing in under five minutes. It’ll never be the same as the rich, eight-hour bone broth placed in front of me at Gammeeok, but throughout an otherwise tough year, it’s brought me more comfort than I ever thought microwavable soup could.

We’re looking forward to revisiting and supporting our favorite seolleongtang restaurants soon to enjoy the dish as it should be, instead of just eating it the cheaty way. And when that happens, these are the places my family and I will head to first.

Pour one out for the first Gammeeok, which closed its doors in the early 2000s. Located next to a hotel in Ktown on 32nd street, the original had a dark wooden-beamed ceiling and rice paper walls meant to mimic the inside of a traditional hanok house. Their signature seolleongtang and radish kimchi are the stuff of my dreams. Now Gammeeok 2.0 is hipper, louder, and meant for the 2am karaoke crowd (it’s open 24/7) with its expanded menu. However, the seolleongtang is still on point.

This is the Flushing offshoot of Gammeeok, and their extensive menu, which also includes Chinese and Japanese dishes, sushi, fried chicken, and beer towers, caters to big parties. The couple who owned both Gammeeok and Tang split the two restaurants during their divorce, with the wife getting Tang (also open 24 hours a day) and the husband, Gammeeok. Tang has a fancier, more contemporary space, but the metal pots of seolleongtang you can spot through the kitchen glass are still the real attraction. 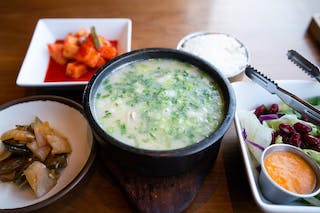 While Gammeok and Tang no longer have the enormous gamasot cauldrons visible to customers, you can see the two here in the open back of the restaurant, broth roiling over flame. Gahwa fully embraces traditional Joseon in its décor with woven sandals hung on rice paper walls and a low, wooden-beamed ceiling. We dropped by on a busy Tuesday afternoon, and the restaurant was already half full for lunch. It also shares a parking lot with the Flushing H Mart, so you can do your shopping too after your meal. Their seolleongtang broth is thick and served with their sweeter, ripened cabbage and radish kimchi. And like Gammeok and Tang, Gahwa also never closes. 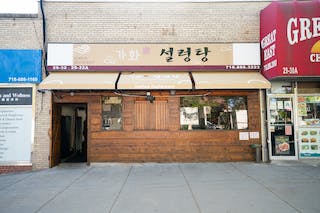 A New Dim Sum Spot In The East Village & More NYC Restaurant News
All the NYC dining info you need for January 4th, 2022.

To-Go Drinks Are Coming Back & More NYC Restaurant News
All the NYC dining info you need for January 6th, 2022.

Olmsted Is Launching A New Menu & Other NYC Restaurant News
All the NYC dining info you need for January 12th, 2022.

Exciting Things To Do & Eat In NYC Between January 12th - 18th
Check out these restaurants, pop-ups, and special events all around NYC.