Going to breweries in cities like Denver and Portland, ME usually means scootering from one big warehouse to another, while weaving through discontented babies in strollers and recent college graduates who are pursuing careers as ski instructors. But New York’s brewery culture is a bit different. Not because there aren’t discontented babies (there are plenty), but because there aren’t many taprooms in the same general vicinity. Ridgewood, however, is one such neighborhood where you can zig-zag from one great brewery to another without worrying about transportation in between. If you’re looking to spend a Saturday drinking interesting beer, hanging out in an open space, and even seeing a free, stand-up comedy show, here’s the plan.

Subway or Bus You can also take the L train to Halsey, the Q39 bus to Forest Ave/Myrtle Ave, or the B26 bus to Halsey/Wyckoff.

A Quick Note About Drinking At Breweries Right Now

In case you haven’t been doing much drinking outside lately, we’re here to remind you of the rules, because we care about you and we also like rules. In accordance with the State Liquor Authority, you’ll have to purchase something to eat to go along with your beer at the outdoor beer gardens we recommend below. This is helpful, least importantly because it means you won’t get drunk on an empty stomach and keep bringing up the oddly specific conspiracy theory that Harper Lee didn’t write To Kill A Mockingbird. Remember, show you care by wearing a mask whenever you’re up from your table. Also, you’re wrong about Harper Lee.

Anyone who sincerely uses the word “brews” as a noun will have heard of Evil Twin’s new-ish spot in Ridgewood. This is the only taproom from a company that started as a nomadic brewery in Denmark, and it’s run by a guy with an identical twin brother who also owns Mikkeller Brewing. Apparently the two brothers aren’t on speaking terms, which explains the name Evil Twin. Yes, you may submit your screenplay pitch about the story of the adversarial identical twins to us at nyc@theinfatuation.com.

Evil Twin’s outdoor beer garden space is an extremely pleasant place to hang out on a Saturday afternoon, and it’s open for outdoor service from noon to 10pm Friday through Sunday, and 2-9pm on weekdays. Try some of their newer releases that you can only get at the taproom. When we were last there, we had one that’s flavored with BBQ beef jerky.

Next, walk a few blocks to Bridge And Tunnel, a much smaller brewery without any family drama (that we’re aware of). This place has an outdoor area that opens at 1pm on Saturdays and Sundays, and they mostly focus on unusual flavor combinations like stouts brewed with oysters or chocolate sours. By this point, you’ve already had something to drink, so you may be more willing to try a beer you wouldn’t normally order, or that you wouldn’t even expect to exist within the realm of possibility. Like a saison made with lobster.

A post shared by Bridge and Tunnel Brewery (@bridgeandtunnelbrewery) on Jul 29, 2020 at 1:12pm PDT

Next, walk two blocks to Queens Brewery’s outdoor setup on Covert Street. This spot has been hosting restaurant pop-ups that serve things ranging from ceviche to chopped cheese, as well as free stand up comedy and live music on weekends. You can check out their Instagram page here for updates on their events.

Pupusas, In Case You Get Tired Of Brewery Food

Casually noshing while seriously drinking may only get you so far. If you get a little too drunk or cranky, go to Pupusas Ridgewood and fill up on thick, griddled masa cakes. We especially like the ones filled with squash and cheese, or chicharron, and you should make sure to get plenty of slaw and salsa.

In addition to fresh pupusas, Pupusas Ridgewood serves tamales de elote, soda, and cucumber lemonade every day from 11am-10pm. It’s mostly a takeout setup, but there are a couple of tables out front if you want to stick around for a while. 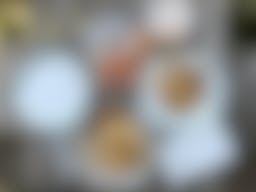 “What Restaurant Will Impress A Native New Yorker?”
NYC eating experiences that’ll work as source material for a story you tell at a party five years from now, all at different price points.

Where To Eat At The Bar Right Now In NYC
20 NYC restaurants with bars where you can have a great solo dinner or eat with a friend.