February 24, 2021
Everything You Need To Know About NYC's New Asian Hate Crime Task Force
How the city is responding to discrimination against Asian communities & their restaurants.

In response to the recent violence against East and Southeast Asian (ESEA) communities in NYC, Mayor de Blasio introduced a new NYPD Asian Hate Crime Task Force in a press conference on Tuesday, February 23rd. The group speaks 11 different languages, and is made up of officers who come from Asian communities within NYC.

One of the lead officers on the task force, Stewart Loo, confirmed that there have been 28 reported hate crimes since the beginning of the pandemic. When pressed by reporters, Loo also acknowledged that figure is likely undercounted. Of the 28 hate crimes reported, Loo says 18 resulted in arrests and are currently in criminal court in their respective boroughs.

We’re at City Hall with the latest #COVID19 updates and more. Join us. https://t.co/WamitsKLZv

For context, when a hate crime statute is added to a case, it raises the charge by a count of one degree. Ultimately, the penalty of each hate crime case is determined by the District Attorney in that borough.

“Even though the Asian Hate Crime Task Force is predominantly a reactive unit, we’re proactively looking through social media and police reports to see if there’s anything we missed,” Loo said. New Yorkers can report hate crimes via 311 or by using the new Stop Asian Hate resource portal.

During the press conference, Jo-Ann Yoo from the Asian American Federation (a non-profit empowering Asian-American groups in NYC) called for the increase of mental health services both within the Asian-American community and beyond. Yoo also invited New Yorkers to show solidarity with the city’s Asian residents on Saturday, February 27th at 1pm in Foley Square. 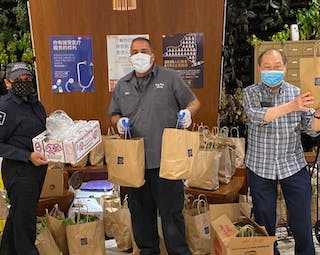 Mayor de Blasio was then asked by a reporter if specific funds would be allocated to the city’s Asian-American restaurant owners impacted by discrimination, and forced close to down.

He did not indicate that Asian business owners would be given any particular funds beyond the resources currently available for small businesses. De Blasio said, “We’re trying to help all communities but obviously if any restaurant particularly suffered from discrimination, we want to lean in and help them in every way we can.” The mayor emphasized a need for more direct support, contingent on the incoming federal stimulus package. “We’re looking forward to going farther with direct support like tax breaks, loans, and other direct support for small businesses particularly if we can get the kind of stimulus we’re hoping for.”

Looking for ways to support NYC’s Asian communities? We wrote about ideas for places to donate, restaurants banding together, and ways you can intentionally dine out right now.