Walk down the stretch of Church Avenue between McDonald Avenue and Dahill Road known as Kensington’s “Little Bangladesh” with Shahana Hanif, and you’re not likely to get very far. People will stop you every few feet to talk with the 30-year-old feminist organizer and activist, and it’s clear that she’s looked to as a leader in her community.

The Kensington-born politician is set to become not only the first woman to represent District 39 on New York’s City Council, but also the first Muslim and Southeast Asian representative. Her neighborhood’s tight-knit Bangladeshi community was at the heart of her grassroots campaign, and it shows in the way she’s greeted by residents as though she’s part of their extended families.

“Bangladeshi hospitality is unlike any other—it’s unmatched,” says Hanif as we sit down to chat over rosogolla at Abdullah Sweets on Church Avenue, “and what rings true across all levels of class identity is that people show love with food.” 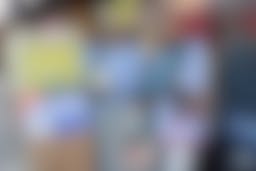 Although some people tend to think of Jackson Heights as the epicenter of Bangladeshi culture in New York City (even Hanif’s family used to venture to Queens to eat out on special occasions when she was a child), Kensington is home to a vibrant Southeast Asian community. According to Hanif, Kensington’s Bangladeshi residents come primarily from three areas: Chittagong, Sandwip, and Noakhali, regions that are more poverty-stricken than some other places in Bangladesh.

“Most folks who migrated arrived through ship jumping—my father was a ship jumper—and then others through the diversity visa, and others through family reunification,” says Hanif. “I emphasize the class identity because there’s a perception that South Asians arrive through the education visa and the academic pathway, but it’s not [as] true for Bangladeshis—or [for] most Bangladeshis who are creating community here and in Jackson Heights.”

Kensington’s Bangladeshi community is perhaps most visible in and around the restaurants and grocery stores along Church Avenue. Hanif says that there is a sort of “collective solidarity” around the hyper-regional food served in the neighborhood, and at any given time of day, you’ll find restaurants packed with Bangladeshi men having tea and samosas—the dining rooms a sort of liminal space between a community center and living room. 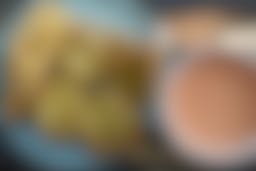 Although politics is her passion, Hanif grew up with one foot in the restaurant world. Her father, who was among the first wave of Bangladeshi immigrants to come to Brooklyn over 35 years ago, owns Radhuni Sweets on McDonald Avenue. Standing across the street from her father’s restaurant, the presumptive City Council member talks about the intricacies of Bangladeshi seafood dishes and how she can’t eat without fresh green chili pepper to open up the palate.

“To declare loving food is really an act of resistance for me,” Hanif says. It wasn’t always so easy for her to talk openly about food, or to be photographed while eating—something she made a point to do throughout her campaign as part of an effort to highlight small businesses, while simultaneously changing the way female candidates are portrayed. Growing up, Hanif was subject to a different set of rules and expectations than the boys in her community, which made for a complicated relationship to food. Now, she sees food not only as a vital way to fuel organizing efforts and connect with her constituents, but as a means to preserve culture.

“I look forward to eating more ... pairing this with how the city addresses food insecurity, how the city cultivates and preserves Black, brown, and immigrant food production across our ethnic enclaves. When I eat in Jackson Heights, in Flushing, I feel a connection to our immigration pathways,” she says. 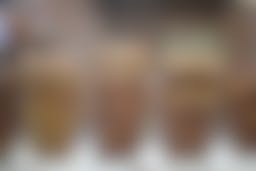 Food sustainability, both in terms of access to food as well as stable jobs for restaurant and grocery workers, are issues she’s passionate about. After the pandemic shuttered many restaurants and markets in the area, Hanif worked to spearhead a crowdfunded mutual aid program for undocumented individuals in her district. And when peak Covid hit during the month of Ramadan, she focused on finding ways to provide culturally specific food to the area’s Bangladeshi and South Asian communities.

“Undocumented men in our part of Kensington are restaurant workers, meat cutters, and butchers,” Hanif says, “and what we saw during Covid with the closure of all restaurants in every single ethnic community is how deeply affected workers were, and how deeply excluded the workers were from the conversations about financial assistance and food assistance.”

Hanif says that fighting for the dignity of restaurant and grocery workers is not only a key component of her platform, but of keeping Kensington’s Bangladeshi community thriving.

Fortunately, Kensington’s Bangladeshi food scene is not only stable, it’s thriving. Here are some of Hanif’s favorite spots in the neighborhood, from a woman-owned cafe that serves some of the best fuchka in the five boroughs to a traditional sweet shop.

Shahana’s order from Ghoroa is the beef teheri with chicken roast on the side — follow her lead, and you won’t be disappointed. A festive dish similar to biryani or pulao, teheri is made with kalijira rice, a nutty varietal native to Bangladesh characterized by its miniature grains. Top it with some gravy from the chicken roast, then slice up and mix in the fresh green chili peppers that are served on the side to infuse your meal with a pleasant heat. 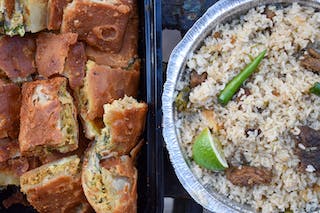 According to Hanif, Radhuni (her father’s place) is the best in the neighborhood for Bangladeshi seafood dishes. Radhuni is busy all day, but in the mornings, they turn their hot counter into an assembly line that churns out some of the best breakfast wraps in all of Brooklyn. They start with a fresh chapati the size of your face, then add any combination of spiced scrambled eggs, sauteed fresh vegetables, and aloo bhaji, a potato dish that you’ll find at almost every restaurant in the neighborhood. At night, come here for the traditional seafood dishes like patri ni machi, a masala-infused salmon dish that’s steamed inside of banana leaves. 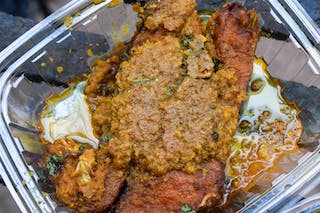 A relative newcomer slightly off the main drag, Sonia Cafe is quickly becoming the go-to spot for Bangladeshi snacks (the best in Kensington, according to Hanif). Their samosas and piyaju are outstanding, but the real reason people come here is for the fuchka. Similar to but not quite the same as pani puri, crisp, hollow puri are filled with chickpeas, chilies, red onion, herbs, and grated hard-boiled eggs. They’re served with a container of tamarind water, which you’ll want to spoon into the puri before popping them whole into your mouth. 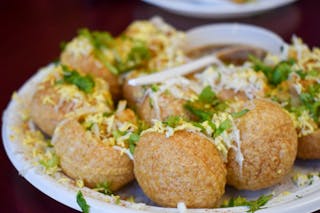 Like most spots on this list, Abdullah serves an all-day savory menu of curries, rice dishes, and flatbreads, but sweets are the main attraction here. They’re best known for Rasgulla—sweet dumplings made from fresh cheese curds called cchhena and semolina that are cooked in sugar syrup. The box of mixed cham cham is another great option if you want to try a few different kinds of sweets, and their brightly-colored laddu are fudgy and sweet. A longtime neighborhood fixture, this is where Hanif’s mom would order Rasgulla for special occasions. 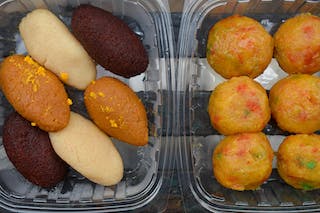 Madhuban is Hanif’s pick for the best naan in the neighborhood, with an airy interior and a delicate char on the outside. The plain naan is perfect for pairing with all of Madhuban’s curries and stews, but the garlic naan is good enough to be a satisfying snack on its own. Hanif says beef stew is the go-to order here, and take note that even without the addition of fresh chilies, the dish has some heat. They also serve rice dishes, including teheri, biryani, and pulao, as well as a variety of traditional sweets. 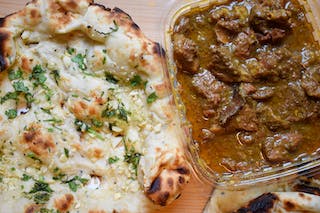 Kabir’s is a great place to stop for a snack at almost any time of day. Hanif comes here for the chicken patty, which she says is unlike anything else you can get in the neighborhood. The “patty” is an ample triangle of puff pastry stuffed with spicy ground chicken. She’s also a fan of the milk tea, which is strong and bracingly sweet. It’s a perfect accompaniment to their green chili-studded pakoras, which are available in the afternoons and evenings. In the morning you can pick up a samosa, which on any given day might have slightly different ingredients in the filling. 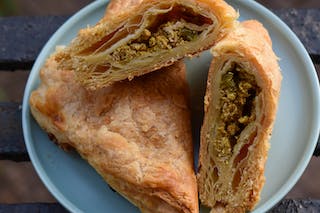