Photo Courtesy Reef
April 23, 2021
I Just Can’t Get Excited About Ghost Kitchens
They’re being marketed as the future of restaurants, but I really hope that’s not true.

It sounds exciting, doesn’t it? Ghost kitchen. When I hear those words, I picture a team of chefs dressed like Green Berets, cooking inside a stealth helicopter, camouflage smeared on their cheeks while they drop burgers onto your doorstep with little burger parachutes.

The reality, unfortunately, isn’t quite as exciting. Ghost kitchens are not tactical restaurants that sear beef under the cover of darkness. In Miami, they’re usually small food trucks or “mobile operation units” located in vacant parking lots that only offer delivery and takeout. They’ve become quite the thing nationwide over the last year, but are especially prevalent in Miami, where one of the country’s biggest ghost kitchen companies, Reef, is based. And yesterday on April 22, Miami commissioners unanimously passed a new ordinance to allow a yearlong pilot program for Miami’s ghost kitchens to operate on more legally stable ground. A spokesperson from Reef summed it up like this in a press release sent out this morning: “This ordinance creates the first ever permitting structure for ‘mobile operation units’ that would facilitate conversion of urban spaces like parking lots into hubs for food preparation/delivery.” The law, according to the Herald, is “believed to be the first of its kind in the United States.”

I can’t even get excited about the little delivery robots.

It’s a pretty big deal for the ghost kitchen industry, which already has billions of dollars behind it, and is now poised for a huge expansion in Miami. And yet, I simply cannot muster a single drop of enthusiasm for the concept of the ghost kitchen. I can’t even get excited about the little delivery robots that Reef will be deploying in Brickell and Downtown. And I love robots. Even the evil ones on Westworld.

Over the last few months, I’ve tried a handful of Miami ghost kitchens: Fuku, Genuine Burger, Mamma Parmigiana, and Man vs Fries - which are all Reef-backed concepts. None of them were terrible. But also, none of them were good. Orders often got messed up, food came late and cold, and the quality was very inconsistent. But, to be clear, I do not think this is the fault of the people working in these ghost kitchens. They’re doing a better job than you’d expect, considering that they’re cooking in glorified closets, getting slammed by orders, and having to deal with the logistical nightmare of coordinating with multiple delivery apps.

That, I think, is one thing that really bothers me about the ghost kitchen: they don’t put anyone in a position to succeed. Not the cooks sweating it out in those small spaces, not the delivery drivers who have to bust their asses in traffic for unlivable wages, and, ultimately, not the customer, who pays a high delivery fee for food that could arrive in seriously gnarly condition. Also, some drunk person in Brickell is definitely going to knock over one of those poor delivery robots to try and steal some french fries. 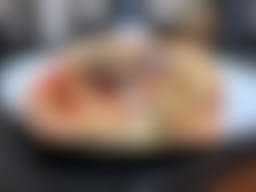 A cross section of my burrito from Man vs Fries

I suppose I can see a world where the ghost kitchen could be useful. It could be a way for a young chef with limited resources to build a brand that could expand into something wildly successful. That’s what happened with Man vs Fries, a California-based concept that’s now in 15 ghost kitchens across the country, including Miami. But, when asked in a recent Bon Appétit story whether his employees were being fairly compensated, “Bornhorst said he didn’t know and never thought to ask about pay,” Priya Krishna writes.

I also question whether or not ghost kitchens need to be a necessary part of that process. There were some Miami concepts that achieved success this year without using a ghost kitchen. Chef Benjamin Murray started selling bánh mì meal kits from his home when he lost his job during the pandemic. They were absurdly delicious, earned him a loyal following of locals, and now he’s in the process of opening up his own shop, Benh Mi, on Española Way. Local baker Helen Kim did something similar with Oori Bakeshop, running a takeout operation of incredible baked goods from her apartment. Now Oori, too, is opening a storefront in Edgewater. And the same thing happened with Zitz Sum, a dumpling takeout service that eventually morphed into an exciting new restaurant, which celebrated its grand opening in Coral Gables this week. (I went last night. It’s awesome.) 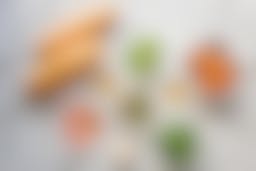 A meal kit from Benh Mi / Photo by Merritt Smail

Plenty of stories like that come to mind when I think of places like United States Burger Service, Drinking Pig, Dumpling Lady, Li’s Dim Sum, Rosie’s, and Lil Laos - all fantastic local concepts that started as some form of a pop-up. And these are the kinds of stories I find very easy to get excited about. In a perfect world, the billions of investment dollars floating around out there would make its way directly into the pockets of people like them, to help create something unique, sustainable, and meaningful to the communities they’re located in. In a perfect world, we’d be unanimously passing laws that helped make their life easier. And in a perfect world, you wouldn’t have to worry about your food never arriving because someone flipped over your poor delivery robot.

Where To Celebrate A Birthday In Your 30s
Have a blast (and be in bed by 10pm).

The Meet In The Middle Guide: Where To Eat With Your Broward Friends
Because if there’s one thing Broward and Miami can agree on, it’s that driving sucks.

The Best Peruvian Restaurants In Miami
From ocean-fresh ceviche to hard-to-find Andean dishes.

9 Unique Croquetas To Try In Miami
These spots are putting a different – and wonderful – spin on the beloved finger food.