If you want to know everything that’s happening with LA’s restaurants and bars right now, then congrats - you’ve come to the right place. Each week, we’ll be using this page to keep track of the latest restaurant and bar openings, reopenings, closings, takeout specials, and other exciting or noteworthy updates around the city.

For our full list of more than 1200 restaurants offering delivery and takeout, organized by neighborhood, check our LA Neighborhood Takeout And Delivery Directory. And if you’re looking to get outside, we’ve also got constantly updated guides to our favorite patios in the city, and new and unique outdoor dining options.

And as always, if you have any tips, questions, or just want to chat, send us an email at losangeles@theinfatuation.com. 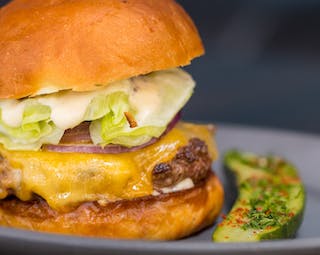 when you see a shitty L.A. restaurant used as a decadent location in mad men pic.twitter.com/ITlZHnGL0A

This Week In… Iced Coffee Extortion

You might call it a shameless plug, or straight-up extortion, but over the weekend, we posted this hot BTS photo of how we chose the spots for our LA’s Best Iced Coffees And Cold Brews guide. And for 1,000 RTS (and/or legal U.S. tender) we’ll release the name of [REDACTED]. Our DMs are open.

For 1,000 RTs we’ll released the name of [REDACTED] pic.twitter.com/Mm3LA2ReZT

And In Banana Pudding News…

The results are in, and the bad guy of the week is… warm banana pudding?

Some context: It was just another normal Monday when NYC “food content creator” @DomNTheCity decided that it was time to break the internet. Like Morpheus to Neo, she outstretched both of her hands (a.k.a. posted a Twitter poll) and presented the internet with a crucial choice: Banana pudding, hot or cold?

The answers came in fast and furious, and naturally, Twitter lost its collective mind.

guess what else is hot? hell. which is where you will be going for voting hot https://t.co/AuWnQUR3CM

Anyway, if you need us, we’ll be in the corner, eating this banana pudding from Hotville Chicken at whatever temperature they give us it.

And now... THE INTERNET WEIGHS IN ON SQIRL:

the usda, which acknowledges that mold on preserved meats and hard cheeses is safe/normal (and suggests cutting off the mold off those foods and moving on) says this about moldy jam: the mold could be producing a mycotoxin, discard ~all~ of it ¯\_(ツ)_/¯ pic.twitter.com/fqH7FWzrxv

what if we kissed in the secret mold kitchen at #sqirl pic.twitter.com/t58QodAM4z

I have eaten
the jam
that was in
the walk-in

and which you were probably
scraping
the mold from

Catching up on the news from the weekend pic.twitter.com/M7BLTaJr2w

In a tribute to Ennio Morricone, Yo-Yo Ma posted this video of him playing the Love Theme from Cinema Paradiso. The iconic Italian film composer, who worked with Quentin Tarantino, John Carpenter, Sergio Leone, and Pier Paolo Pasolini (among many, many others) died Monday at the age of 91.

I'll never forget the way Ennio Morricone described music as “energy, space, and time.” It is, perhaps, the most concise and accurate description I’ve ever heard. We'll truly miss him. This is the Love Theme from "Cinema Paradiso." #EnnioMorricone pic.twitter.com/kpbkodhHrh