Eugene Lee
May 4, 2021
The Most Chinese Thing About Me? My Fondness For Shengjianbao
SJB are easy to love - especially at these three LA spots - just don’t treat them like another badge on your Girl Scout-style foodie sash.

Eight is the luckiest number in Chinese numerology, 50% of my childhood home’s landline number, and the exact quantity of tennis ball-sized, pan-fried soup dumplings you can expect to receive from Alhambra’s Kang Kang Food Court – the purveyors of LA’s best shengjianbao.

The heftier, thicker-skinned cousin of xiaolongbao, each SJB sports a deep-fried, crispy brown bottom and a white top studded with black sesame seeds and scallions. Inside you’ll find a soupy, sweetish pork filling that will scald your tongue on first bite if you aren’t careful. Unlike their more famous relatives at Din Tai Fung, there’s no pristine, napkin-free way to dive into SJBs – a high-risk, high reward car takeout scenario if I ever saw one, but worth every errant grease stain on the steering wheel of my Subaru.

When still relatively fresh from the wok, shengjianbao are most efficiently eaten, in my opinion, by first tearing off a small hole in the bun and slurping the soup out. After that, thankfully, each subsequent bite is cooler than the last, able to be dipped into a shallow bath of black rice vinegar and ginger with ease, the fragrant, tangy sauce cutting through the richness. Whether I’m eating shengjianbao out of a styrofoam container or (before the pandemic) off a blue and white floral melamine plate, I can’t help but appreciate their dimpled, imperfect pale skins, glistening like the final product of a glass skin makeup tutorial on YouTube. 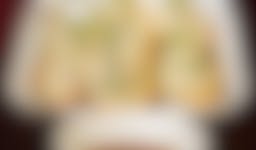 I’m not alone in adoring shengjianbao. For those who eat pork and don’t shy away from the discernible sounds of eating, SJB are easy to love, similar to other small, round, vaguely cute Asian things, like the sulking faces of Yoshitomo Nara’s cartoon girls or the soot sprites from Spirited Away. For me, however, these dumplings invoke somewhat painful memories from middle school, when my weekend Mandarin tutor Mei first brought them to my kitchen table one Saturday afternoon. I never did fully master the four tones of Mandarin, but you can still hear the sound of her vocal drills whenever I struggle to pronounce the flat tones of the word shēngjiānbāo.

As with nearly all aspects of my ancestral culture, my fondness for shengjianbao is somewhat put upon – a product of my parents’ attempt to pass me off as a Chinese American kid, thereby erasing the not-insignificant role of the Philippines in our family history. In reality, no one in my Southeast Asian Chinese family has ever spoken Mandarin with native fluency. Biting into a pan-fried soup dumpling from Kang Kang, I can still taste the sweet relief of the final minutes before Mei left my house, leaving me to a box of room temperature shengjianbao and my own inability to grasp the high-falutin form of my grandparents’ language, Hokkien.

My fractured Asian American identity, however, is not where this story of shengjianbao ends. In a time when people are finally grokking that anti-Asian racism is still, in fact, racism, I can’t just spin another gauzy tale of childhood (dis)comfort food, and leave it at that.

Kang Kang Food Court is not a relic from some bygone golden past - it’s one of many Asian immigrant-run small businesses that deserve your support and recognition today. These restaurants deserved support and recognition before the Atlanta shootings that killed six Asian women, before the wave of pandemic-related anti-Asian racism, even before the late critic Jonathan Gold put restaurants like Jitlada and Chengdu Taste on the map. That these restaurants often serve delicious, “cheap” food is true, and shengjianbao is one stellar, elusive example. But they don’t exist in a vacuum - so don’t think of shengjianbao as another badge on a Girl Scout-style foodie sash. Whether you seek them out on the dim sum menu at Arcadia’s China Red, or on the Westside at Tasty Noodle House, one part of your SJB journey across the city will be certain: wherever you go, you’re going to find Asian Americans. Treat us like the literal human beings we are - with respect.

The 3 Best Shengjianbao Spots In LA

Kang Kang sells the best shengjianbao in town - it’s been my go-to spot for SJB for over a decade. They also sell frozen dumplings to cook at home, as well as a great beef roll. Take note: It’s cash only. 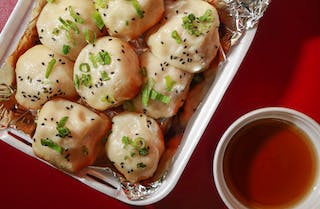 Recently reopened for indoor dining, China Red’s shengjianbao are part of its dizzying dim sum menu, coming three buns to an order, each topped with a tiny crown of black sesame seeds. Order the sticky rice, the wonton-wrapped siu mai, and the translucent rice paper har gow filled with shrimp for a complete yum cha.

Tasty Noodle House has five locations across Los Angeles. Their shengjianbao runs on the doughier side, with a wonderfully crispy brown bottom coated in sesame seeds. They also deserve a noteworthy version of Chinese black bean noodles (zhajiangmian) and soup dumplings as well. 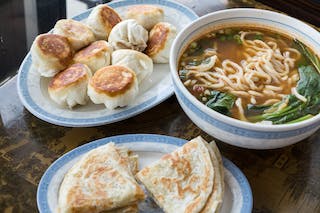 The Best Restaurants In South LA
The 26 best places to eat in South LA, from Windsor Hills to Watts.