A couple of weeks ago, we published our guide to The Best New Burgers In LA. And, like always, people shouted at us for ones that we missed. We heard a lot about Papilles. But we heard even more about Heavy Handed, a Sunday-only pop-up in West LA.

Seriously - we read about Heavy Handed on our Instagram comments. In our inboxes. Our Twitter mentions were a constant stream of burger rants. So naturally, we started to wonder if this weekly(ish) burger spot could really be as good as the internet had led us to believe. Because - we’re not sure if you’ve noticed - the internet has blown up a lot of mediocre things over the years, including quite a few LA burger spots.

We’re happy to report that Heavy Handed is not one of those spots, because their burgers are excellent. They’re simply constructed: a single, double, or triple smashburger, with cheese, pickles, and house sauce on a fluffy potato roll. The burger itself is made of 100% ground short rib, so it’s somehow both crispy and greasy. Heavy makes their own bread-and-butter pickles, too, which add a crisp, vinegary sweetness to every bite, and the American cheese is so melty, it’s basically become one with the patty.

And as such, we’d like to admit that we were wrong, and you were right. If you’re looking for one of LA’s Best New Burgers, consider Heavy Handed officially on the list. Actually, we’ve already added it. 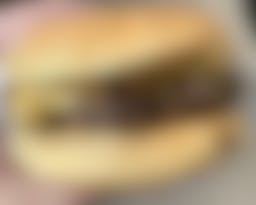 Double Burger - The Double Burger is what you’ll get here. You might be tempted by the triple, or even see people doing quadruples, but resist the urge to get too gluttonous. The double is the ideal ratio of meat-to-cheese-to-bun, and even if it looks small, you’re going to be extremely full when you’re done.

Beef Tallow Fries - We love these fries. Probably too much, considering how quickly they disappeared from the little bag they came in. They’re cooked in beef tallow, otherwise known as that stuff McDonald’s used to cook their fries in - and what made them so tasty. These are particularly great with a side of Heavy Handed’s creamy, tart, take on Thousand Island dressing. Now if you’ll excuse us, we have to Google “Where to buy beef tallow.”

Where To Eat When You’re Feeling Sad And Might Need To Cry
We’re fine! We really are...