The Best Bread In London, Ranked

The very official ranking of London's best bread, according to us.

An old, dumb and wholly incorrect restaurant adage is about not filling up on bread. It’s stupid. Not quite as stupid as, say, forgoing starters out of respect for mains - seek help Greg Davies, seek help now - but it’s up there. Because bread is obviously the greatest invention of all time. Why do you think the idiom about sliced bread goes how it does? The thing is, there’s also a lot of bad bread out there as well. Stodgy and sad, it takes up room like a manspreader at rush hour. So if you want to double down on bread, which you absolutely should, then you want to make it worthy. From fresh naan to sweet soda bread, this is officially the best bread (from restaurants) in London, ranked. 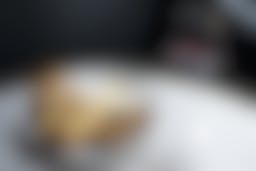 Unquestionably the best bread plate in London and, in fact, the entire universe - Noble Rot’s bread means more to us than all of our distant relatives. A tricolore plate of brown tones in the form of a tri-carb of slices this is bread that once eaten is reordered. And reordered. And possibly reordered again. But which is the best on the plate? The focaccia or the soda, no offence sourdough. The former is... a marvel. Crisp on the crust and precisely 98% oil, this focaccia did not merely adopt the olive oil it was cooked in. It was born in it. Molded by it. The recipe is from The Sportsman, the renowned Whitstable restaurant where former head chef Paul Weaver worked, while the soda bread is à la another legendary seafood joint in the shape of Bentley’s. It’s a black treacle recipe. Sweet and crumbly and wholly cake-like, with a smear of salted butter, it makes us wonder: what is the point of menus? Because when bread - the king, the empress, the Jedi master of all foodstuffs - is this good, well, you need nothing else. 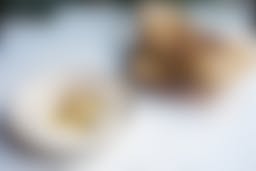 You’ll find Ararat’s bread all over London. In little corner shops, local supermarkets, and maybe even in your mouth at a restaurant - you just might not necessarily know it. The hole-in-the-wall Pakistani bakery throws out hundreds, but what feels like thousands of flatbreads, on a daily basis. We like them straight from the source. Out of the oven, bubbled and chewy, topped with a load of garlic and cheese or, even better, an unidentified meat. The fact you can pick them up for a quid or two, wrapped and ready to launch face-first into on Ridley Road is an enormous bonus. Though if you’re looking for a sit-down session with Ararat’s flatbreads alongside labneh and whatnot, then look no further than Bubala. 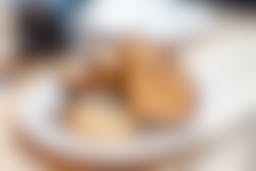 Bread shouldn’t be filled up on in a restaurant. That’s what they say. They being a sanctimonious internet egg, a distant relative you see at a wake buffet or, perhaps, the person you plan to spend the rest of your life with. Whoever it is, they’re wrong. And they’re really very wrong when it comes to Brat. The wood-fired bread at this wood-fired restaurant is something we wouldn’t mind eating for the rest of our life. It comes in different forms. There are the grilled flatbreads, palm-sized pockets of hot air, dough, and blackened craters preferably topped with three luscious bathing anchovies. And then there’s the bread and butter: crusts singed to a smoky crack, drizzled in oil, with a dollop of creamy burnt onion butter. We don’t make a habit of this but, to quote ourselves, “it tastes like it’s been grilled and churned by a deity.” 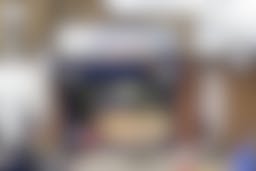 A bowl of bananas down the market. An indeterminate number of hot wings from bossman. Three freshly made naan breads slapped in the tandoor and slid out warm and bubbling. What do these three treats have in common? They’re all just £1. Much as we love the hot wing haggle, it’s Baban’s Naan we want to talk about. During our time living in N4, it’s safe to say that our naan intake was truly off the chain thanks to the tiny shop on Blackstock Road - trust us, their naans elevate the most bang average of weeknight curries into something quite delicious. We still prefer them tandoor-fresh though. Slapped in, shifted around, and slid out. Piping hot, exhaling bubbling heat, and sprinkled with za’atar, wrapped with kubba and salad, or topped with whatever takes your fancy. 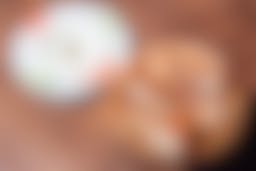 “FM(L), this bread will seduce you.” Not our words but the words of LisaJemma, a 69 reviews-strong contributor to TripAdvisor. Punny skills aside, Jemma knows her stuff. Because great things can always be made greater, so it’s no wonder that FM Mangal’s already delicious flatbread - warmed over their ocakbasi and ready to be dunked, dipped, and mop all in its path - is made even better by a little sizzle and spice. It’s first whacked on top of cooking kebabs to soak up some of their oozing fats, before being smeared in spices. Glistening from the grill and smoky from the spice mixture, it’ll have you Oliver Twist-ing for the entire meal. 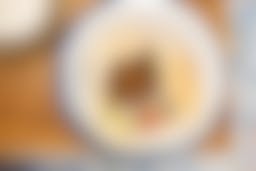 First thing’s first: Balady don’t make their own pita. They get it in from Taboon on Golders Green Road, but that doesn’t matter. Not one iota. Because firstly, they have the good sense to realise that Taboon’s pita’s are some of the best in the business. Fluffy and cavernous pockets that are begging to be filled with a pick ’n mix array of falafel, aubergine, hummus, amba, and more. Of course, you can also go straight and pair fresh warm pita with a 2oz tub of hummus and just go at it. Tear it off and get some aubergine and tahini to soak up while you’re in the metronomic swing of things. 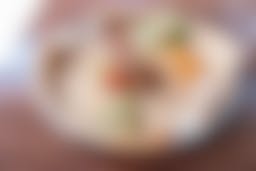 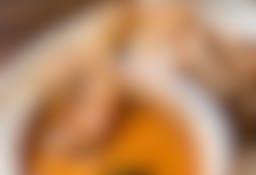 In the words of Omar Little, if you come at the king you best not miss. Admittedly, he wasn’t talking about missing out on Roti King’s luscious roti canai - but who cares? The flatbreads made at this legendary Malaysian spot are no secret. In fact, they stay with you. Buttery finger stains at the top of your jeans, rogue drips of curry on your t-shirt. That’s what Roti King’s roti canai is: a flaky velvety vehicle for sauces. 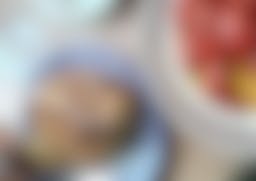 As far as blackboards go, there are rarely, if ever, any mistakes on the one at Quality Wines. Things change on the big plates but in the sections that read salumi and snacks, they do not. This includes their £3 focaccia plate, a three slice gesture to the God of EVO. Yes because, you guessed, the focaccia from this blackboard comes from the same school as Noble Rot’s and The Sportsman’s before it. It’s not the school of hard knocks, it’s the school of big glugs. Gleaming to the point of appearing polished, and with a galaxy of craters and crevices to hold that oil, it’s one of the finest focaccias around. 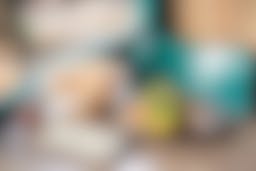 Call us tight, old fashioned, or any number of other things (behind our back, please) - but you just can’t beat free bread. Free. Bread. It just sounds right, doesn’t it. Traditional Turkish restaurants are now one of the only reliable endorsers and providers of free bread in London and Gökyüzü’s has a special place in our heart. The manner in which the still-warm-get-it-in-my-face flatbread comes here - wordlessly and with some immediacy - never fails to make our heart flutter. The fact that it comes with a plate of cacik and dressed salad too, well, it’s just like people of a certain generation say: sometimes the old ways, are the best ways. 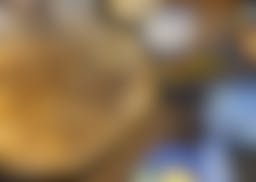 One of our favourite genres of bread - of which you should now be realising, there are many - is the whole table bread. You know, an injera, or a naan, or a Persian flatbread that’s so big, so shamelessly gargantuan and all-encompassing, that it may as well have it’s own seat at the table. Or better yet, a table to itself. This is the genre of Patogh’s big special bread. It’s slapped inside their oven before emerging as a giant sombrero-sized disc topped with sesame seeds. It’s textures on textures too. Shatteringly cracker-like on the edges while being wafer soft and tearable in the middle. A perfect pairing to anything. 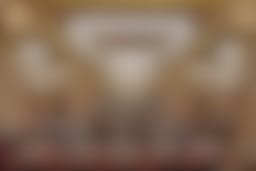 There isn’t a word in the English language that does justice to describe the combination of free, seemingly unlimited, and delicious carbohydrates. Irresistible, yes, but it doesn’t quite capture the feeling, the je ne sais quoi, of woofing down the first basket of Brasserie Zedel’s still-warm, completely addictive sliced baguette, before catching the eye of a member of staff, looking down at the empty basket, looking back to them, nodding, and mouthing T-H-A-N-K-Y-O-U. Again. Again. And again. 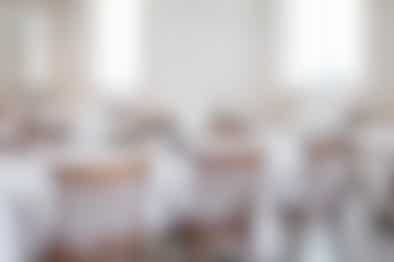 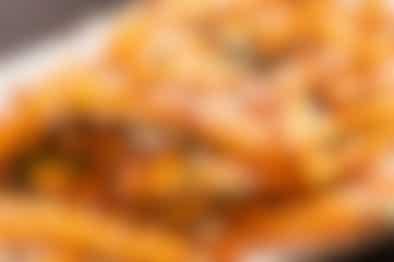 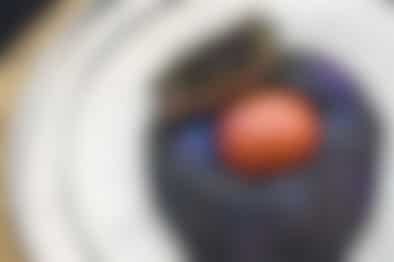 From sizzling lamb chops, to a cosmic flatbread, to the fullest of Englishes - this is our bucket-list of the dishes you have to eat in London. 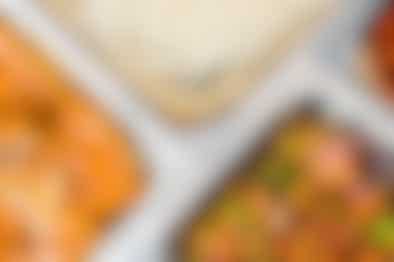 Where To Eat In Peckham 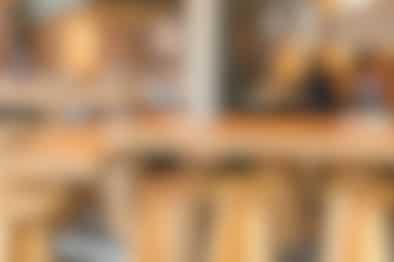 Dodge the bright lights of the Oxford Street McDonald’s and go to one of these places that also has space for you and all your friends.
Restaurant Finder