We don’t read recipes all that often, but when we do attempt to cook something for ourselves instead of eating out, we usually end up consulting Bon Appétit. We also usually end up ordering in immediately after said recipe has been executed, but that’s not the point.

It says a lot that a magazine that was founded in 1956 is still such a strong brand in the world of food, and Bon Appétit has certainly weathered the internet storm and remained relevant over the years. Much of their recent success can be attributed to today’s Friday Fives guest, Adam Rapoport, the Editor In Chief. Adam came to Bon App (that’s what they call it in the biz) from GQ in 2010 where he had been the Style Editor. He also spent time writing about restaurants for Time Out and the James Beard Foundation over the years.

You might guess that Adam has an opinion or two about where you should eat in NYC, which we’re happy to present to you in Friday Fives form. Check out his Perfect For picks below, hit up the Bon Appétit website for some cooking tips, and follow Adam on Instagram for a first hand look at what it’s like to have a test kitchen in your office. Hint: it looks pretty sweet.

“A while back, I took a bunch of guys to Buvette, the tiny, super Frenchy wine bar/restaurant, where everything is tiny, from the knives and forks to the tables. My friends gave me grief all night. But what do you they know? it’s the still the best restaurant in the West Village.” 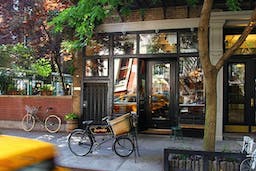 “Normally, I’m a ribeye guy, but last time I was at the Polo Bar I figured I’d give the strip steak a try. Good lord was it tasty. Super crispy, charred beautifully, aggressively (but not over-) seasoned. Pretty much perfect.”

“A been-there-forever Italian-ish joint in the West Village. Franco the bartender has my drink (vodka soda) in front of me before I even grab a bar stool. Chicken Milanese with a side of spaghetti with oil and garlic is my go-to.”

“I mean, obviously. A can of Budweiser, Beastie Boys blasting, really, really good food, not just the pizza. If I had conceived a restaurant when I was 17 back in 1987, this would’ve been it.” 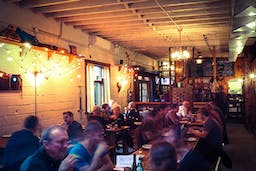 Some butcher restaurateur guy from Brazil who posts loving shots of meat.

A good example of how a brand can do Instagram in a fun, organic way.

Because my kid loves to laugh at his posts.