Salads Of The Midwest

We love the Midwest. The spirit of this part of the country lines up perfectly with the spirit of The Infatuation, and by that we mean people here know how to EAT. Honestly, part of the reason we launched in Chicago was that if we see another piece of expensive toast in San Francisco or one more "grains bowl" posturing as a meal in New York we're gonna freak out. We want real people food. And people aren't meant to eat like wealthy hamsters.

To that end, we'd like to present you with this salute to a glorious phenomenon we like to call Salads Of The Midwest™. Because in this particular section of our great nation, just when you think you're about to eat something healthy, you get served a bowl of lettuce with Peeps on it.

That's right, this is what a kale salad looks like at The Little Goat. What's that on top you ask? That's the Mount f*cking Kilimanjaro of fried onions. And I'm pretty sure that's a side of cream cheese in there too. Or butter. Maybe it's pudding. You know what it's not? Good for you. Let's do this.

This is the only acceptable salad that you should be able to order at a place famous for hot dogs. The macaroni is for texture and probably vitamins.

We imagine the discussion in the kitchen probably went something like this. "Bacon bits? How about bacon strips? Oh, wait, and instead let's take an entire chicken, fry it, turn that into 'bits,' and then put those on top. Boom. Salad."

He adds, "Just for the record there was iceberg lettuce under all that meat and cheese." Well, of course there was, Robert. It's a salad.

This nicely prepared salad from Imo's appears to be made up of approximately 70% Provel, a cheese that we're pretty sure is 70% plastic. Organic plastic, though.

SOMEONE IN MINNESOTA ACTUALLY MADE THIS

Actually Sarah, no it can't. No matter where you are, once you put Peeps on something, it is immediately not a salad. But we're not here to nitpick. And honestly, we're not all that concerned with who made this excellent creation. What we want to know is who ate it. So we can knight them.

Do you love Salads Of The Midwest? Do you have pictures of them? Tag some with #SaladsOfTheMidwest and #EEEEEATS and we'll 1) definitely feature it 2) probably seek it out and eat it. God bless America. 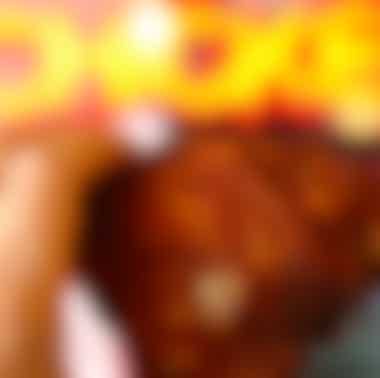 You know you want fried chicken, and we know where to get it. From hole in the wall to fancy, these are the 10 best spots to get fried chicken.