We’re always looking to make The Infatuation the best platform to find restaurants, and we appreciate your feedback!
CKTL

July 1, 2021
How To Make A Rican Rum Runner Nutcracker
A twist on the iconic street cocktail, by the bartender behind Bushwick’s Coqui-Nut.

Nutcrackers, or nutties, are strong and sweet cocktails typically sold on New York City street corners and beaches throughout the summer, but have found an even wider audience through social media in recent years. Michele (who asked we only use her first name), the founder of Coqui-Nut, started selling her own nutcrackers seven years ago at Jacob Riis Park Beach, combining both her bartending and make-up expertise to offer refreshing drinks and festive body paint to New York beach-goers. A former bartender, Michele had already been making coquitos (a coconut-based Puerto Rican cocktail typically enjoyed around Christmas) during the holiday season, so nutcrackers were a natural next step.

“It didn’t even feel like work,” Michele said of her summers at Riis, “It was just a fun thing I did on the side.”

Nutcrackers’ appeal during the summer is twofold: an ice cold slush is ideal for cooling off on sweltering summer days, and people like the rush they get from doing something that's technically illicit with minor stakes.

“There is something a little like, illegal about it, that people like,” Michele explained. “You’re not buying drugs in the middle of the day, but it feels kind of like that.” Michele also takes pride in that she defies the expectation for a nutcracker seller — usually super masculine dudes who might sell drinks in quart containers on city stoops — by adapting certain recipes to be vegan-friendly and welcoming the LGBTQ+ community with open arms.

“We identify as Queer and we hang out with [our] community,” she says of her client base. “We’re not here to judge anybody. We want to have some drinks and have a good time. It’s just the overall nice feeling. And people enjoy it.”

When it comes to enjoying your own homemade nutcrackers, it’s best to ease yourself into it (they’re a lot stronger than their tropical taste indicates). Michele recommended sticking with natural sugars from fruit or fruit juices to avoid a next-day hangover. Her Rican Rum Runner, a version of her popular Rum Punch she makes for Coqui-Nut, uses a little agave nectar to taste, but she tries to stay away from juices or mixes that have added sugar. She also said it’s important to recognize Nutcrackers’ cultural origins, and to respect the communities that created the iconic drink.

“Nutcrackers were born out of predominantly Black and Brown neighborhoods, and not in the cute areas,” she said. ”So I think giving it that respect, or acknowledgement should still be honored. A nutcracker is more than just a bottled drink in a little plastic container. It has a culture behind it.” 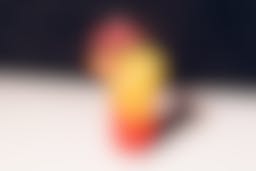 Step One: Prep Combine ingredients in three separate cups. You’ll blend these separately to create a layered color effect in your glass.

Step Two: Blend Starting with the peach cup, add to the blender. The key to getting the best texture is having a few peaks of ice stick out before you blend! If too thick, add a dash of liquid to get that perfect slush. If it's too thin, add ice. Layer 1/3 at the bottom of a tall clear glass.

Step Three: Repeat Give the blender a quick rinse, then add the coconut cup and blend. Carefully scoop out with a spoon and build the second layer. Repeat with the strawberry cup to finish off the top layer.

Step Four: Garnish Garnish with a strawberry and/or umbrella & enjoy!

If you want more nutcracker inspiration or order your own drinks straight from the source, make sure to check out Michele’s instagram @coqui_nut. She also hosts a YouTube series called “Do It Your Damn Self,” where she teaches viewers how to do everything from make their own hand sanitizer to making creative drinks and shots.